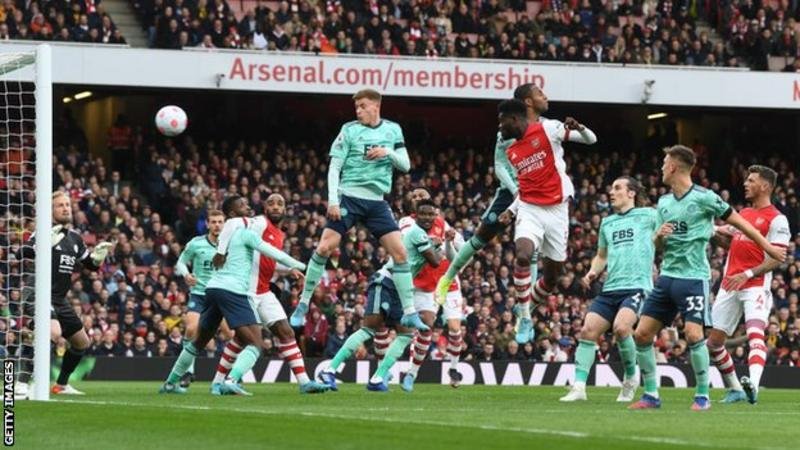 The deserved victory at Emirates Stadium lifted Arsenal back into fourth place, one point above Manchester United, who beat fellow top-four contenders Tottenham on Saturday.

Thomas Partey headed in unchallenged from Gabriel Martinelli’s corner after 11 minutes as the hosts capitalised on their dominant start.

Partey also struck the crossbar as Arsenal pressed for a second, while goalkeeper Aaron Ramsdale was twice called upon to deny Harvey Barnes – including a superb reaction save from a header – as the visitors threatened before half-time.

But, after Leicester defender Caglar Soyuncu was penalised for handball following a lengthy video assistant referee review, Alexandre Lacazette fired in a 59th-minute penalty to put the Gunners in control.

Soyuncu received only a yellow card as Partey’s still goal-bound header was cleared off the line by the alert Luke Thomas.

However, there was to be no way back for Brendan Rodgers’s side, who remain 12th in the table.

Seeking to end a five-year absence from Europe’s elite club competition, Arsenal ensured they remain in pole position in the race to qualify with a ninth win in 11 league games.

With three games in hand over fifth-placed United from which to further strengthen their position, Mikel Arteta’s men – unlike their immediate rivals – have achieved consistency in both performances and results to emerge as favourites for fourth.

The opening goal was a familiar tale for Leicester, who have now conceded a league-high 15 goals from set-pieces – excluding penalties – after Partey’s run to the near post went ignored.

But, just as he was in October’s reverse fixture, which Arsenal also won 2-0, the inspired Ramsdale was up to the task when the Foxes eventually gained a foothold in the contest.

Martinelli and Bukayo Saka impressed in attack for Arsenal, while Partey was influential in midfield, but it was the slick Martin Odegaard who stood out as he created five big chances for his team-mates in the first half alone.

Rodgers’ side must quickly dust themselves down as focus switches to securing a place in the last eight of the Europa Conference League, as they take a 2-0 lead into their second leg against Rennes on Thursday.

For Arsenal, a meeting with title-chasing Liverpool on Wednesday will provide an acid test of their progress since a 4-0 loss at Anfield earlier this season.