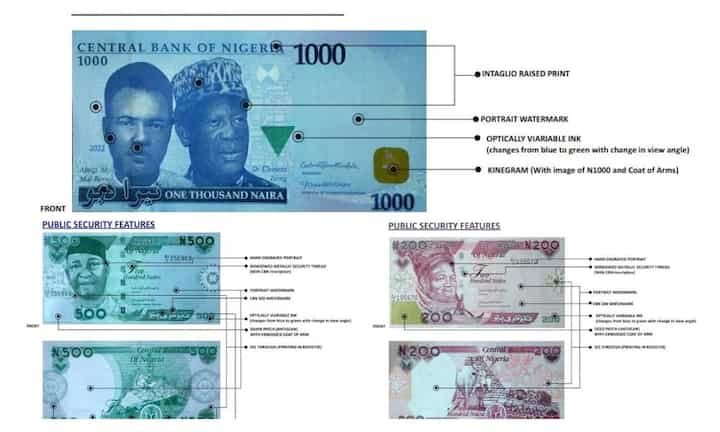 The Central Bank of Nigeria on Tuesday, December 20, 2022, released security features of the new naira notes. The bank said it is bound by its commitment to protecting Nigerians from fraudsters and scammers

The security features are available in the redesigned N200, N500 and N1,000 notes

Barely five days after their release, the new naira notes are allegedly being counterfeited by smart alecs in Nigeria.

The Central Bank of Nigeria had, at the unveiling of the new notes, stated that they are loaded with security features which make them uneasy to counterfeit.

To protect Nigerians from fraudsters and counterfeiters, the CBN released details of and positions of the security features of the new notes, according to information from Vanguard.

At the front of the most significant denomination in Nigeria, the CBN shows close to its name a security feature of intaglio raised print, a portrait watermark, and optically variable ink in the form of a rectangular arrow pointing downwards.

At the back of the N1,000 note are an Iridescent band, windowed metallic security thread, a see-through printing register and a raised intaglio print.

At the front of the new N500 note are hand-engraved portraits and windowed metallic security thread with CBN inscription.

Almost the same features are replicated in the new N200 note, except for a gold patch with an embossed Coat of Arms.

On Thursday, December 15, 2022, the new naira notes officially went into circulation as the Central Bank of Nigeria (CBN) makes good on its promise of introducing the new banknotes.

Many Nigerians rushed to the various banks in the country with the hopes of cashing the new notes but were largely disappointed.

Despite the mixed reactions that trailed the new notes, many banks complained of an inadequate supply.

Why we shifted passage of 2023 budget – Lawan