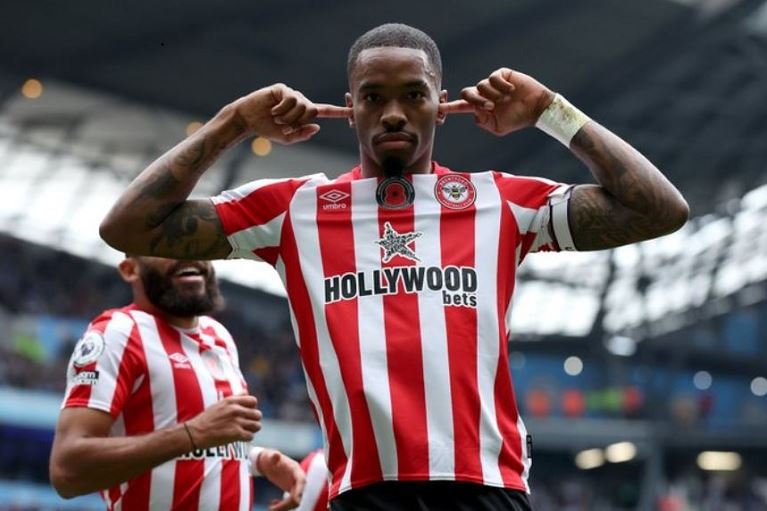 Toney missed out on a place in Qatar but demonstrated his vital importance to Brentford with an outstanding all-round display that left the reigning Premier League champions stunned as the Bees took all three points with a 98th-minute winner.

It was fully merited for Brentford’s positive approach as they refused to take a backward step from the first whistle, even after Manchester City’s Phil Foden restored equality with a crisp left-foot half-volley seconds before the interval.

City, inevitably, turned up the tempo after the break, Ilkay Gundogan missing a glorious chance to put them ahead, but Brentford were a constant threat on the break with Ederson twice having to save from the ever-dangerous Toney.

And it was a fitting conclusion to that added period of 10 minutes, mainly for a head injury to Aymeric Laporte, when Brentford caught City on the break for Toney to sweep home Josh Dasilva’s cross – the striker almost completing a hat-trick seconds later only for Kevin de Bruyne to clear off the line.

Toney and Brentford show the way

Brentford demonstrated that bravery can be rewarded at Manchester City, not even needing any real slices of good fortune to deliver another outstanding victory under manager Thomas Frank.

Leicester City’s risk-averse approach at home to the champions recently drew a negative response, their stand-offish manner made to look even more unwise when they lost 1-0.

Brentford went for Manchester City from the first whistle, perhaps noting the vulnerability that saw them just scrape victory over Fulham with a last-minute penalty last weekend.

Toney was thwarted by Ederson even before he opened the scoring and with the outstanding Rico Henry providing pace and threat on the flanks, Brentford did not change their approach even after Foden’s equaliser looked to have changed the game.

Brentford may have caught City on an off-day but Frank produced a gameplan that kept Erling Haaland quiet for once while posing a constant threat that eventually brought that dramatic late winner.

The ecstatic scenes at the final whistle were understandable and thoroughly deserved. No-one could begrudge Brentford their celebrations.

No escape for Manchester City

Manchester City just crawled over the line against Fulham with a stoppage-time penalty from Haaland but there were no escape this time and they did not deserve one.

City started as if in a daze, conceding early chances, and they were still only half awake even after Toney headed Brentford in front.

It looked like they were back on track after Foden’s leveller but for all their increased pressure there was none of their trademark fluency as they were frustrated by Brentford’s defensive resilience and determination.

It could have been a lot worse but for keeper Ederson and it was hardly a huge shock when Brentford raided so deep into added time to take the points, City caught in disarray at the back as the Bees swept forward.

This is a result that dents City’s hopes of retaining their title and sends them into the lengthy break for the World Cup on the worst possible note.