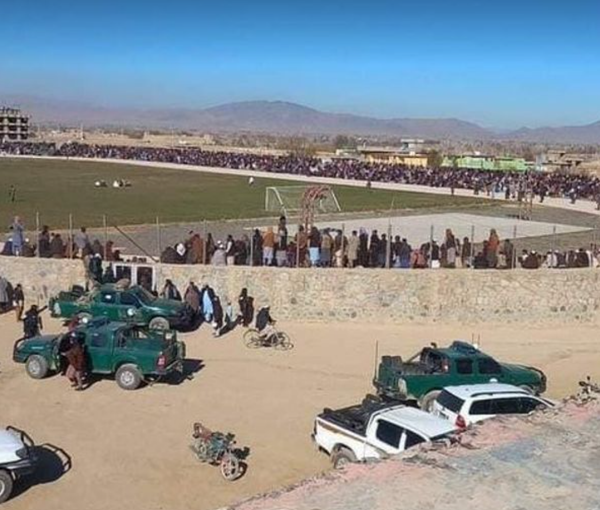 A Taliban court flogged 12 people, including three women, on various charges at the football stadium in Pul Alam city of Logar province.

Gul Rahman Akhundzada, head of Taliban appeals court in Logar said that it is a happy moment that after 20 years, Hodud has been implemented.

He said that on the orders of Mullah Hibatullah Akhundzada, the Taliban leader, they will implement “Hodud”. He added that the cases of the accused have been investigated and they have confessed to their crimes.

Mawlawi Enayatullah Shoja, the deputy governor of the Taliban for Logar, also said that the purpose of the Taliban is to strengthen the Islamic system and implement Sharia law.

Shoja stressed that the implementation of Sharia is the solution to Afghanistan’s major challenges.

Images posted on social media show that hundreds of people had gathered at the football stadium to watch the flogging.

Hudud refers to offences which, under Islamic law, certain types of punishment are mandated, while qisas translates as “retaliation in kind” — effectively an eye for an eye. Hudud crimes include adultery — and falsely accusing someone of it — drinking alcohol, theft, kidnapping and highway robbery, apostasy, and rebellion.

The flogging in Logar province comes a week after the Taliban’s supreme leader, Hibatullah Akhundzada, ordered judges to enforce punishments for certain crimes in line with the group’s strict reading of Islamic Sharia law.

This interpretation of Islamic law includes public executions, public amputations and stoning – although exact crimes and corresponding punishments have not been officially defined by the Taliban.

During their rule from 1996-2001, the Taliban were condemned for regularly carrying out punishments in public, including floggings and executions at the national stadium in Kabul.

The government also vowed that they would not repeat the brutal repression of women; but since the group’s return to rule women’s freedoms have been severely curbed and a number of women have been beaten for demanding rights.