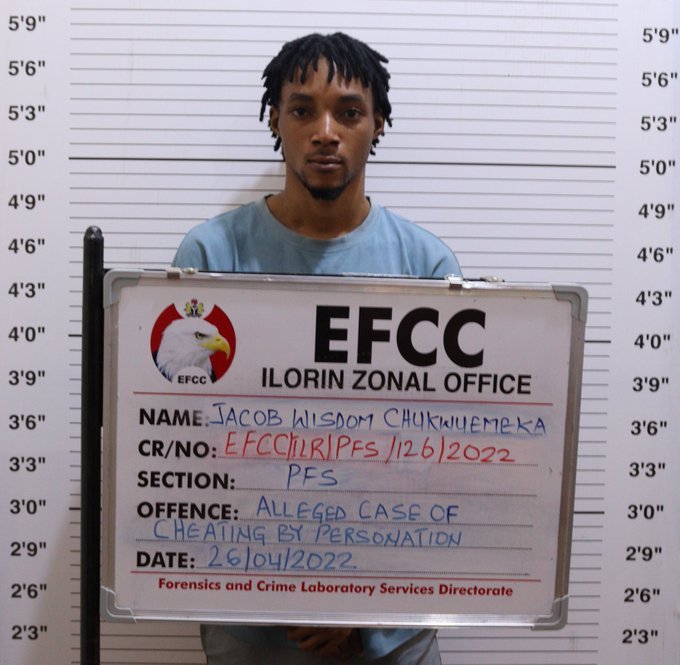 A professional footballer, Jacob Wisdom Chukwuemeka, was on Monday, October 4, 2022 convicted and sentenced to six years imprisonment, for offences bordering on internet fraud and possession of fraudulent funds.

He was jailed by Justice Muhammed Sani of the Federal High Court sitting in Ilorin.

Chukwuemeka was jailed, after pleading guilty to two-count charges bordering on possession of fraudulent funds, owing to his arraignment by the Ilorin Zonal Command of the Economic and Financial Crimes Commission, EFCC.

Count one of the charge reads:

“That you, Jacob Wisdom Chukwuemeka between 6th May 2021 and 22nd April 2022 within the jurisdiction of this Honorable Court did retain the control of the gross sum of N792,454.00 (Seven Hundred and Ninety Two Thousand, Four Hundred and Fifty Four Naira Only) in your bank account number 3137249795 with the name: Jacob Wisdom Chukwuemeka domiciled with First Bank Plc which you knew to be proceeds of criminal conduct and thereby committed an offence contrary to and punishable under Section 17 (a) and (b) of the Economic and Financial Crimes Commission (Establishment) Act 2004”

He pleaded guilty to the charge when it was read to him.

Consequent on his plea, prosecuting counsel, Aliyu Adebayo, prayed the court to convict and sentence him as charged.

In addition, the court ordered the convict to restitute his victim, the sum of N524,454.00 (Five Hundred and Forty Two Thousand, Four Hundred and Fifty Four Naira Only) being the balance of the proceeds of his fraudulent dealings against him.

Chukwuemeka’s journey to the Correctional Centre began, when he was arrested by operatives of the Ilorin Zonal Command of the EFCC, for retaining suspicious funds in his bank accounts. He was investigated and could not account for the funds.