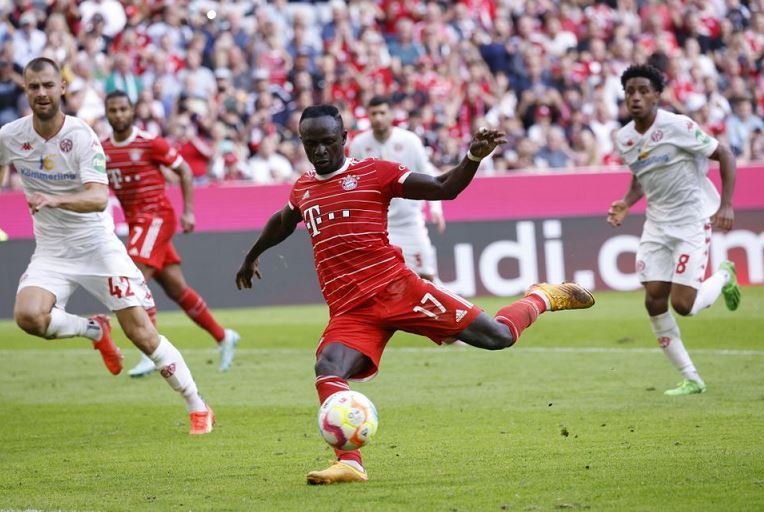 Bayern Munich demolished visitors Mainz 05 6-2 on Saturday, with Sadio Mane scoring once and setting up two more goals, to take over the lead in the Bundesliga.

Senegal international Mane, who scored in Bayern’s 3-0 midweek win at Barcelona in the Champions League, also missed a penalty. Germany international Serge Gnabry, Jamal Musiala and Leon Goretzka were also on target for Bayern along with substitute Mathys Tel and Eric Maxim Choupo-Moting.

Mainz cut the deficit twice, with goals from Silvan Widmer and Marcus Ingvartsen, after also missing a penalty.

The champions went two points clear at the top of the league with 25. Union Berlin, in second place on 23, are in action against Borussia Moenchengladbach on Sunday. Mainz drop to eighth on 18.

It was Bayern, however, who scored again with Musiala threading in a shot to finish off another quick Bayern move.

Musiala, a firm candidate for Germany’s World Cup squad, has now scored seven league goals, as many as Mane, and set up another four.

Mainz came agonisingly close to pulling back a goal when Burkardt rattled the crossbar with a shot and Lee Jae-sung thundered the rebound on to the post in the 31st.

Mane did much better on his rebound effort a little later, slotting in after Mainz’s Robin Zentner had parried his penalty.

Mainz, who had won their previous three games in all competitions, bagged a deserved goal in first-half stoppage time when Widmer headed in from a corner after Ulreich had saved a spot kick to deny Burkardt.

Bayern, who also hit the woodwork with Choupo-Moting and Musiala in the second half, did not let up and Mane curled in a superb cross in the 58th for Goretzka to head in. Two more goals either side of Ingvartsen’s effort completed the rout.