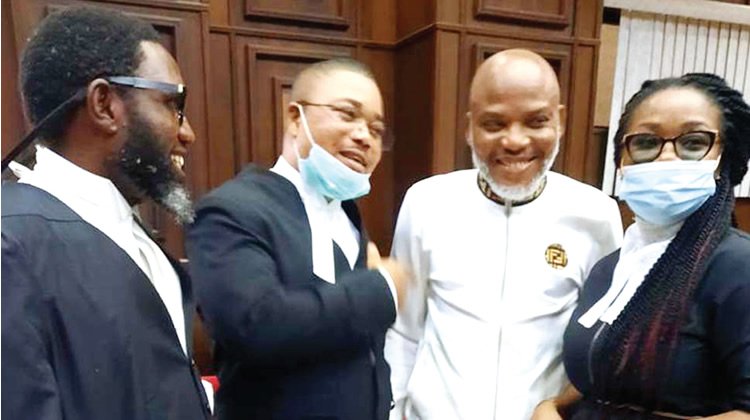 Nnamdi Kanu with his lawyers

The Court of Appeal sitting in Abuja, the Federal Capital Territory on Thursday upheld the appeal of the detained leader of the proscribed Indigenous People of Biafra, Nnamdi Kanu.

The Court held that the Federal Government breached all local and international laws in the forceful rendition of Kanu to Nigeria from Kenya, thereby making the terrorism charges against him incompetent and unlawful.

In a judgment in an appeal by Kanu, by Justice Oludotun Adefope-Okojie, the criminal charges by the Federal Government against Kanu were voided and set aside.

The Appellate Court said that the Federal Government having flagrantly breached the fundamental rights of Kanu, lost the legal right to put him on trial.

The Court held that laws are meant to be obeyed and that the Federal Government has no reason to have taken laws into her own hand in the illegal and unlawful way the matter of Kanu was handled.

Justice Adebola held that failure of Nigeria to follow due process by way of extradition process as prescribed by law was fatal to the charges against Nnamdi Kanu.

The Appeal Court further held that the failure of the Federal Government to disclose where and when the alleged offences brought against Kanu were committed was also fatal to the terrorism charges and made them liable to dismissal.

“By engaging in utter unlawful and illegal acts and in breach of its own laws in the instant matter, the Federal Government did not come to equity in clean hands and must be called to order.

“With appalling disregard to local and international laws, the Federal Government has lost the right to put the appellant trial for any offence.

“Treaties and Protocols are meant to be obeyed. No government in the world is permitted to abduct anybody without following due process of extradition. Nigeria is not an exception or excused. Nigeria must obey her own law and that of international, so as to avoid anarchy”, the Court held.

Reacting to the judgment, Kanu’s lawyer and human rights activist, Ifeanyi Ejiofor, on his Facebook page on Thursday, said Kanu won at last.