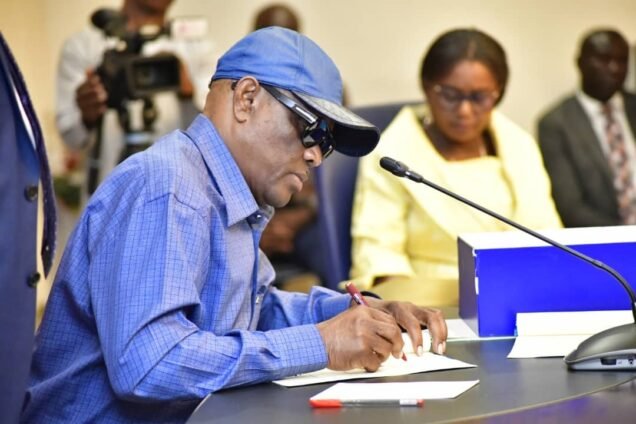 Governor Nyesom Wike of Rivers state on Thursday signed three bills, including one prohibiting the curtailment of women’s right to share in their family’s property into law.

The bill, ‘Rivers in Women’s Right to Share in Family Property Law No. 2 of 2022, alongside ‘Rivers State Compulsory Treatment and Care of Victims of Gunshots Law No. 3 of 2022’, and the ‘Rivers State Pension Reform (amendment) Law No. 4 of 2022’, were signed into law by the governor yesterday after they were passed by the state House of Assembly.

Speaking on the law to prohibit the curtailment of women’s right to share in family property law, Wike expressed displeasure at how most cultures, particularly in Rivers State, do not encourage growth among the people.

Wike, who made the observation at the Executive Chamber of Government House in Port Harcourt, wondered why women are deprived from sharing in the inheritance of their families when they are often the most useful members of the society compared to most male children.

The governor asserted that the law is important to the development of the state, “because it will enable its people to actualise their potential, as women will be allowed by law to inherit their entitlements.

“I don’t know why it’s a taboo; because you’re a girl or a woman, you’re not entitled to inherit what belongs to your father?

“It is not you who decides whether you will have a girl or you’ll have a boy, it is God. So, put yourself in their shoes today where, by the mercy of God, you have three children and they’re all girls and you struggle in life to see what you can keep for your children.

“Tomorrow, one of their uncles comes and say, girls don’t inherit their father’s property. With all your efforts in life, somebody comes to discriminate against them, why? We have even found out that women are more useful to us than the men.

“The day, you’re getting old and dying you’ll know that you need more daughters than men. They will leave their husbands house and come to take care of you.”

Wike further urged women not to be afraid of any threat from members of their families concerning inheritance. He asked them to stand up for their rights and challenge any discrimination against them in court, using the law in order to access their entitlements.

Speaking on the pension reform law, Wike said when pensioners protest, it is because they do not quite understand the good intentions of the government.

He explained that because of paucity of funds, the government must priorities its spending in order to have funds for the provision of services, projects and also pay workers’ wages.

“The government has good intention and wants to do it at its own time. Only government knows when it can carry out this responsibility. Government will pay when it will pay,” he said.

On the victims of gunshot law, Wike, explained that the law is in furtherance of the responsibility of government to protect life because even the criminal needs to be alive to be tried and made to suffer for his crime.

Indiscriminate dumping of waste, LAWMA to shut down markets