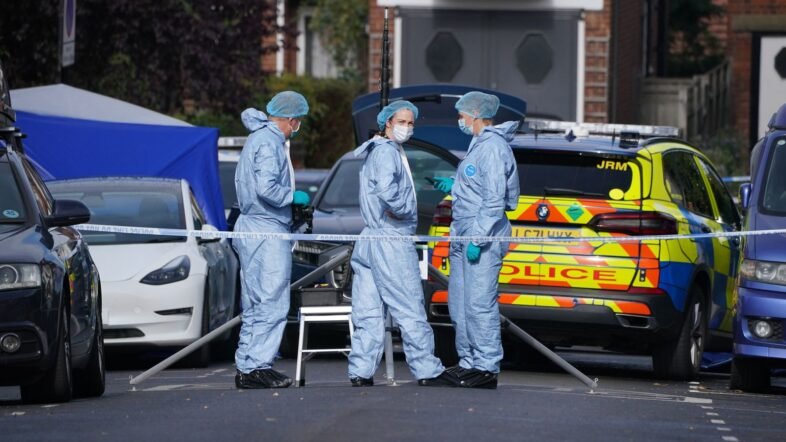 Forensic officers at the scene in Kirkstall Gardens

An unidentified man in his 20s was shot by armed police and died in the hospital, after a car chase through south London.

In a statement, the Met Police stated: “On Monday at 9:51 p.m., specialised weapons officers were pursuing a suspect car in the Lambeth area.”

Just before 10 o’clock on Monday night, police adopted a strategy where they intentionally hit a car to make it halt to end the pursuit near Kirkstall Gardens, Streatham Hill.

“A police car came down Kirkstall Gardens and crashed into him”.

“Another police vehicle pulled up behind him, and they had him locked in at the base of Kirkstall Gardens”.

“The car was immobile when he was shot.”

While they waited for the London Ambulance Service and air ambulance to arrive, officers provided the man with first aid.

Rachel Cook, who lives in nearby Kirkstall Road, said it was a “very quiet residential street” and that people were “very shook up about it”.

On Tuesday, police had cordoned off Kirkstall Gardens and New Park Road, set up a forensic tent, and were gathering evidence there.

A few groups of young guys have gathered on the street, and friends of the deceased have also gathered in Kirkstall Gardens.

An independent inquiry has been started, according to the statement, and the Independent Office for Police Conduct has been alerted.

A bereavement support organisation called The Charity Inquest posted on Twitter that it was trying to get in touch with the deceased man’s family.