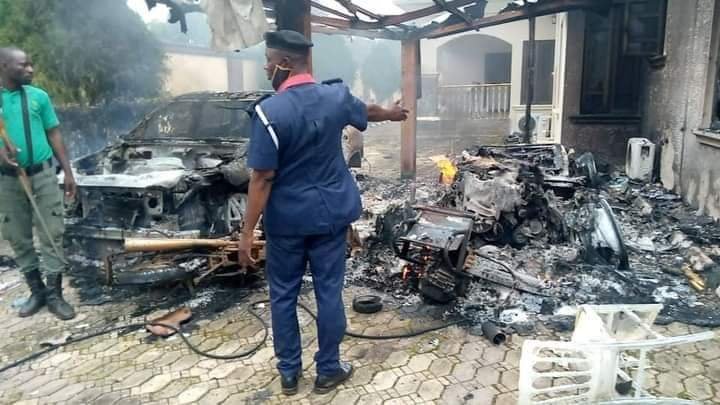 Violent obaship tussle in Agosasa, Ipokia Local Government area of Ogun state has seen no fewer than three persons killed over who becomes the next monarch of the town.

Following the death of the first Oja of Agosasa, Oba James Elegbede, in February 2022, there has been tension over who would take over the throne.

It was gathered that the Obaship tussle got to its climax on Sunday when the youths of Agosasa took to the streets to warn against the installation of an unpopular candidate as the next Oja.

A source said, “the youths of Agosasa are against the steps being taken by a socialite and a member of the ruling All Progressives Congress, Akeem Adigun, to install a king.”

A resident of Ipokia who simply identified himself as Dare, said, “On Sunday, about five persons were injured and taken to hospital when the face-off started.

“The intervention of soldiers, policemen and traditionalists helped to stop the crisis on Sunday evening. I could not pass through the town while going home.”

However, the situation got out of hand on Monday with the murder of one Nafiu Amosun, who was said to be the closest ally to the candidate being supported by the youths of Agosasa.

The angry youths alleged that the said Amosun was shot dead near the Afa river by the other faction and this triggered the current chaos in the community.

Some eye witnesses said that as of Monday evening, houses and vehicles belonging to Akeem Adigun; a former Council Chairman and appointee of Governor Dapo Abiodun, Isiaka Aderounmu, and others had been set on fire by some angry youths.

Another source said two more persons had been killed, making a total of three lives lost in the melee.

“At the moment, Agosasa is like a ghost town with heavy presence of soldiers and policemen. Residents are indoors as those who could flee are already on their ways out of the town. Some are running away through the forest. It is getting out of hand.”

It was gathered that chiefs and elders of the town were also on the run over fear that their houses might be razed.

Meanwhile, sons and daughters of Ipokia Local Government Area had taken to the social media to call for calm, asking the state Government to take an urgent step to restore peace in the community.

“There is war in Agosasa. This is not a joke. The Ogun State Government should take action on Agosasa Obaship issue for now,” an elder advised.

The Ogun State Commissioner for Local Government and Chieftaincy Affairs, Ganiyu Hamzat, could not be reached as of the time of filing this report. Several calls made to his mobile lines were not going through.

The Ogun State Police Public Relations Officer, Abimbola Oyeyemi, has confirmed the incident, saying one person was confirmed to have been shot dead to the best of his knowledge.

“The incident in Agosasa is an Obaship tussle. Unfortunately, one person was shot. We learnt that some houses and vehicles were razed. But our men are there on ground.

“The operation is being led by the Deputy Commissioner of Police, Department of Operations. Normalcy has been restored and our men are on ground to forestall further escalation of the crisis,” Oyeyemi said.

The police spokesman disclosed that some arrests had been made, but he refused to give further details about those arrested.

Oyeyemi warned that people should not take laws into their hands for any reason.

He stated that the Obaship tussle should have been left for the court to address, saying “we don’t need to shed blood because of Obaship titles.”

“If everyone in the town had been killed before the installation, who will whoever emerges the king rule over? It doesn’t worth it. Nobody’s ambition is worth the blood of anybody. We should learn how to address issues legally instead of toeing the path of violence. It doesn’t pay anybody,” he advised.