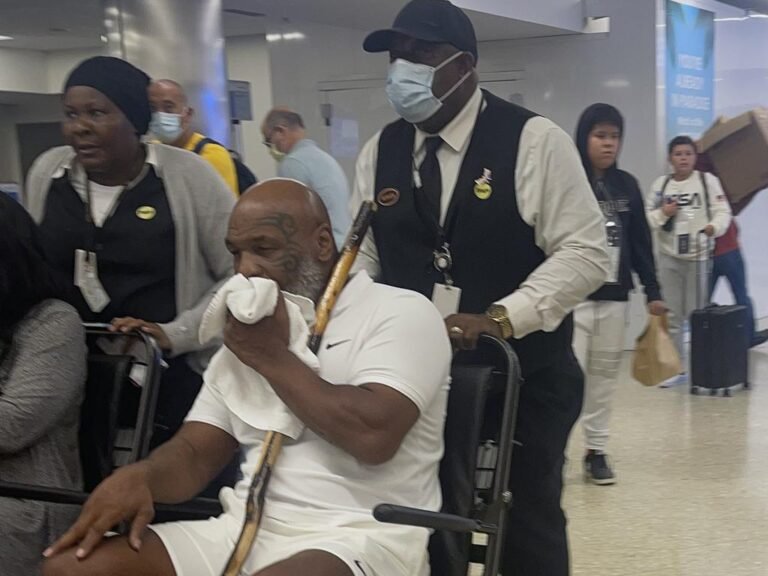 Mike Tyson needed to use a wheelchair at an airport as the former world heavyweight champion struggled with a back injury.

Boxing legend Tyson had one of the most high-profile careers in the sport of boxing having reigned as undisputed champion. The former heavyweight retired in 2005 after losing to Kevin McBride, but has since made a return to the ring in exhibition format sharing the ring with Roy Jones Jr in 2020.

Tyson is now 56 and has been showing signs of his age despite recently posting videos of himself looking in shape. But he recently required a walking stick while in New York and has now been spotted in a wheelchair in Miami.

The boxing legend has reportedly been having back problems and has been suffering from a sciatica flare up which has left him wheelchair-bound as a way of taking pressure off his injury. A source played down the images, telling TMZ : “He’s dealing with a sciatica flare-up. Nothing serious. Just an occupational hazard for an athlete like Mike.”

This comes just days after Tyson was spotted limping while using a walking stick as an aid to keep him balanced, which was reportedly also used in relation to the injury. He has continued to maintain his fitness by training at the gym with his coach, despite being years from his prime days as a champion.

Images of Tyson in a wheelchair sparked more concerns after he issued a prediction on his life expectancy during a recent episode of his HotBoxin’ podcast recently. “We’re all gonna die one day of course. Then, when I look in the mirror, I see those little spots on my face. I say, ‘wow. That means my expiration date is coming close, really soon’.”

Despite Tyson looking frail in recent images, he continues to be linked with a ring comeback against YouTube star Jake Paul who has admitted his desire to touch gloves with the boxing legend. Tyson previously downplayed chances of the pair meeting after dismissing his previous planned deadline of February to return.

Related Topics:Mike Tyson
Up Next