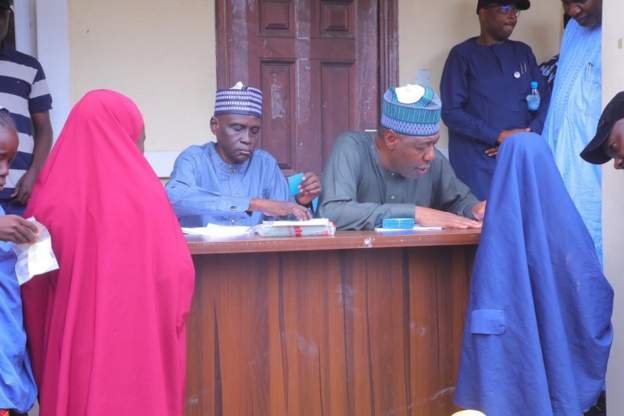 The state governor, Prof. Babagana Zulum, launched the initiative in Monguno town where victims of the conflict have been staying in camps after being displaced from their communities.

The exercise which led to the enrolment of 4,229 children on the first day, targets 7,000 children by the end of this Monday, under the first phase.

The children, aged between 6 and 13 years were enrolled into primary and junior secondary schools, depending on their academic statuses before they were displaced by insurgents from communities in Monguno, Kukawa, Guzamala and Marte local government areas of northern Borno state.

“Today we are here in Monguno for only one purpose, to enroll your wards to schools,” Zulum told guardians and parents of the children and wards enrolled.

The governor applauded parents and guardians for the large turnout to present their children and wards for the mass enrolment.

The authorities say many of the beneficiaries are children orphaned by the violence. They say the project is targeting more than 20,000 children across the state.

Amid leading enrolment of children into basic schools, Governor Zulum took time to visit and assess ongoing construction and renovation works at a site he had approved for the Federal Polytechnic in Monguno.

The governor directed the construction of additional hostels, staff quarters and admin block at the Federal Polytechnic.

Zulum had previously approved and released N100m to enable the school to take-off soon after it was approved by President Muhammadu Buhari in January, 2021.

The insurgency, which began in 2009, has killed tens of thousands of people and displaced millions of others in north-eastern Nigeria and several neighbouring countries.

It forced many children to abandon schools and others could not be enrolled at all. Learning institutions have also been destroyed.

The authorities however say they are making efforts to ensure children are back to class by building new schools and sponsoring their education.

Governor Zulum traveled to Monguno in company of Barrister Mohammed Tahir Monguno who is the Chief Whip of the House of Representatives and APC’s senatorial candidate for Borno North in the 2023 elections.