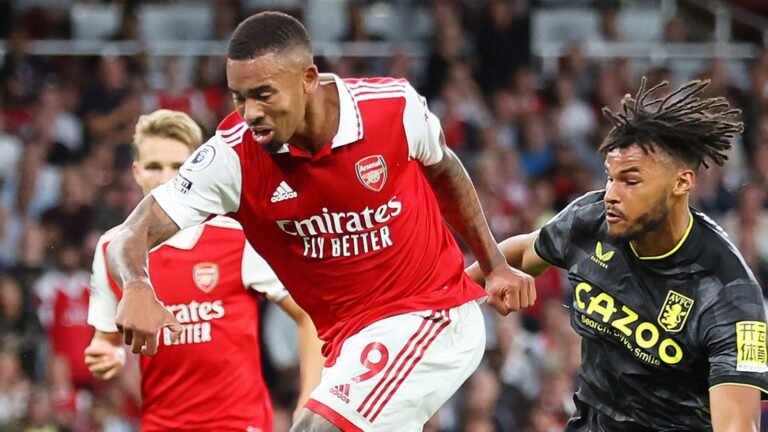 Arsenal maintained their 100% start to the season to stay top of the Premier League with a narrow victory over a lacklustre Aston Villa side.

Gabriel Jesus and Gabriel Martinelli struck in each half as Arsenal extended their perfect start to the season to five games with a 2-1 win over Aston Villa and piled more pressure on visiting boss Steven Gerrard.

However, he could have few complaints here with his side struggling to match the hosts’ intensity particularly in a one-sided first period.

Jesus’ third goal of the season was a meagre reward for Arsenal’s first-half dominance with the Brazilian forward sweeping a low effort past Villa goalkeeper Emiliano Martinez after he had fumbled Granit Xhaka’s deflected shot.

And while Villa improved after the break and found an equaliser directly from Douglas Luiz’s corner – as Arsenal goalkeeper Aaron Ramsdale protested that he was impeded by Boubacar Kamara – they were on level terms for less than three minutes.

Mikel Arteta’s side, who carried the greater threat throughout went straight back on the offensive and regained their lead with Gabriel Martinelli turning in Bukayo Saka’s pinpoint cross.

There were chants of ‘sacked in the morning’ at Villa boss Gerrard from Arsenal supporters during the visitors’ wretched first-half display. His team improved after the interval but with four defeats from five games this season and just three wins in their last 16 in the league, Villa are in need of a boost. Next up for them is free-scoring Manchester City at Villa Park on Saturday evening.

As for Arsenal, they go to Old Trafford to take on Manchester United on Super Sunday where they will be aiming to back up this impressive start with a statement result against a ‘big-six’ rival.