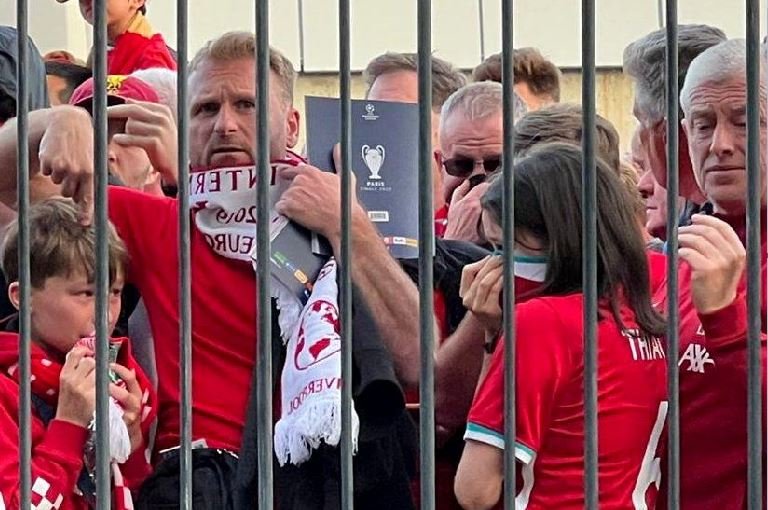 A French inquiry into the security fiasco at the UEFA Champions League final in May has found it was caused by a litany of administrative errors and failings rather than Liverpool fans.

The French government initially blamed supporters and fake tickets for the crowd chaos that led to fans being tear-gassed and robbed in Paris.

But a Senate report has found authorities blamed them unfairly.

Dysfunctional mistakes were made at every level, it said.

In their report, entitled Champions League Final: An Unavoidable Fiasco, two Senate committees investigated what went wrong on the night of the Champions League final between Liverpool and Real Madrid in Paris on 28 May, taking evidence from Liverpool fan and club representatives as well as French officials.

Liverpool fans have told the BBC that the problems were caused by digital tickets not working properly on the night, leading to problems at the turnstiles at the Stade de France. A rail strike made things worse, leading to bottlenecks as supporters arrived for the match.

As well as being tear-gassed outside the ground, fans were robbed and assaulted by local troublemakers. It then emerged that CCTV footage had been wiped a week later because no request had been made to save it.

Laurent Lafon, one of the inquiry’s two chairmen, spoke of a dysfunctional chain of events and failings in preparation: “Everyone went their own way without there being any real co-ordination.”

Paris police, UEFA and the French government are all taken to task by the inquiry: UEFA for failing to plan for potential ticketing fraud and the government for shifting the blame on to supporters.

Co-chairman Jean-Noël Buffet identified the police’s decision to use its anti-terror policy of pre-screening fans outside a rail station as part of the problem: “It just required 10,000 to 15,000 people to make this pre-filtering system untenable.”

When the Paris prefect decided to abandon the screening because of the risk of a crush, the inquiry said the move had “created a space in front of the stadium for hooligans, who were then able to surge into it and attack supporters”.

In evidence to the Senate committee last month, Interior Minister Gérald Darmanin admitted things could have been better organised and apologised for the “disproportionate” use of tear gas. But he maintained Liverpool fans were largely to blame.

He had earlier complained that 30,000-40,000 Liverpool fans had arrived at the stadium either with no tickets at all or with forgeries. UEFA made clear there had actually been 2,700 fake tickets on the night.

The inquiry report reserved strong condemnation for Mr Darmanin himself: “It is unfair to have sought to blame supporters of the Liverpool team for the disturbances, as the interior minister has done, to deflect attention from the state’s inability to properly manage the crowd and suppress the action of several hundred violent and organised delinquents.”

It also found that the use of tear gas on fans had been “particularly aggressive”. Liverpool fans told the inquiry that security methods used by Paris authorities were reminiscent of those deployed against hooligans in the 1980s.

The inquiry accepted that local authorities had little time to prepare for the May final, after it was moved from St Petersburg in mid-March because of Russia’s invasion of Ukraine. But it criticised UEFA for failing to legislate for fake paper tickets.

The shocking scenes outside the stadium came as an embarrassment to the government ahead of June parliamentary elections and as France plans for the 2023 Rugby World Cup and 2024 Paris Olympics.

The interior minister eventually apologised to supporters, but inquiry co-chairman Mr Buffet said he had inflamed the situation by “spouting rubbish”. Had he admitted he had got it wrong, there wouldn’t have been an issue, he said.

Responding to the Senate report, the Spirit of Shankly supporters’ group called for a full apology from the French government. Liverpool Disabled Supporters Association said French police and Mr Darmanin should “feel a deep sense of shame” and called on the interior minister to resign.

“When can we expect an apology…?” tweeted metro mayor of Liverpool City Region Steve Rotheram, who was at the game.