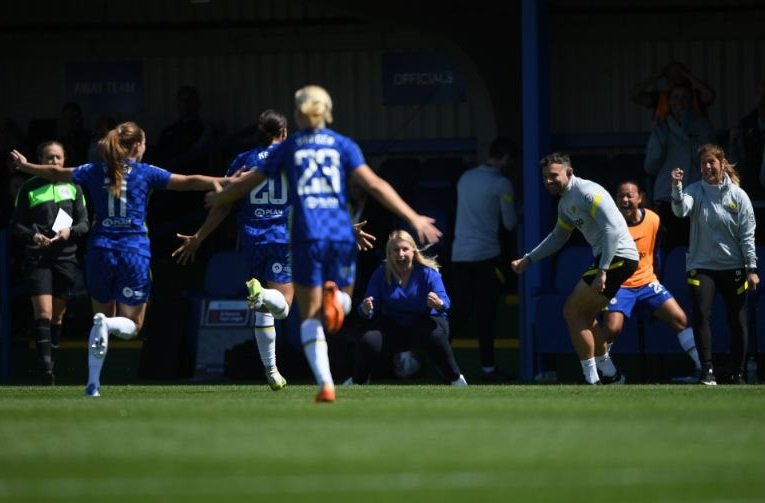 Chelsea won a historic third successive Women’s Super League title in dramatic fashion on the final day of the season with victory over Manchester United.

Sam Kerr scored two stunning volleys in the second half as Chelsea came from behind in a six-goal thriller.

The Blues, who win the league by a point over second-placed Arsenal, knew victory would give them the title.

Manchester United led 2-1 at half-time before Kerr’s double and a Guro Reiten strike at Kingsmeadow.

Arsenal won 2-0 at West Ham but had to settle for finishing as runners-up.

It is the first time in WSL history that a club has won the title in three successive seasons and Emma Hayes’ side can make it a domestic double with victory over Manchester City in next Sunday’s FA Cup final at Wembley.

And admire it again. 🤌#CFCW

Manchester United finish the season in fourth place and miss out on qualification for next year’s Champions League – although Manchester City’s 4-0 win at Reading meant a United victory would not have been enough.

Fans were on their feet at full-time and sang “Champions of England, we know who we are” on a joyous day which concludes one of the most thrilling WSL seasons since its introduction.

It promised to be a dramatic day at Kingsmeadow and that is exactly how it turned out.

Chelsea fans poured into the ground with flags and banners. They were in carnival voice before kick-off.

But Manchester United’s rapid start threatened to ruin that and there were ripples of tension throughout the crowd when Martha Thomas’ header put the visitors in front.

Erin Cuthbert’s powerful equaliser quickly lifted the mood again, while news came through of Manchester City breaking the deadlock at Reading which came as a double blow to the travelling United fans.

“That’s why we’re champions”, sang the Chelsea supporters in response but United were keen to spoil the party and England international Ella Toone’s deflected strike once again put them in front.

But Chelsea were not giving up the title that easily. They scored two goals in five minutes in the second half – the first a sensational volley from Kerr on the rebound.

Reiten put Chelsea in the lead for the first time when she drilled it into the bottom corner following a sublime through-ball from substitute Ji So-yun, playing in her last WSL game for the Blues.

Chelsea fans were already celebrating – despite title rivals Arsenal taking a second-half lead over West Ham on the other side of London – and Kerr stole the show with a sensational volley from 30 yards out which dipped over goalkeeper Mary Earps to make it 4-2.

Ji came close to capping off a hugely successful Blues career with a goal when her powerful shot was blocked late on, while home fans serenaded Pernille Harder as she walked around the pitch after being substituted.

The fans chanted “Chelsea, champions” for the remaining minutes and left Kingsmeadow – and London – in blue.

Chelsea have dominated English women’s football in recent seasons with Hayes having now clocked up six WSL titles during her time in charge.

The Blues boss, who won Fifa coach of the year in January, led the team to their first WSL trophy in 2015 and this was Chelsea’s fifth success in six years.

Rivals Arsenal finish the season without a trophy for the third year in a row.

Hayes, who celebrated with her players after Kerr’s stunning second goal, must now prepare for the FA Cup final where they meet Manchester City in a domestic cup final for the first time.

But first, Hayes will celebrate this latest victory with her family, while it provides the perfect send-off for departing trio Ji, Drew Spence and Jonna Andersson – who have all played their role in another Chelsea title-winning campaign.

Everton beat Leicester to move out of bottom three