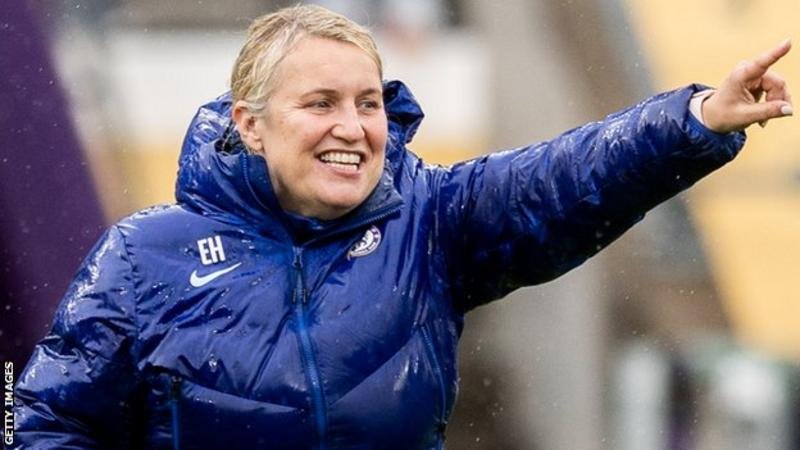 The 44-year-old will enter a 10th season in charge of the Blues, having won 10 major titles.

She led the club to their first Women’s Champions League final last season which they lost 4-0 to Barcelona.

It capped a campaign that saw the club win the WSL, the League Cup and reach the last eight of the delayed Women’s FA Cup as they eye a domestic treble.

“Everyone knows what this club means to me,” said Emma Hayes. “The work we’ve done together over the last nine years has been hugely rewarding, full of growth of the women’s game, accompanied with winning, which is one of the club’s key values.

“I really look forward to keep building on the successes we’ve already achieved and I’m delighted to have extended further.”

Emma Hayes was the subject of speculation linking her to the vacant manager’s role at AFC Wimbledon earlier this year but stated that the League One side could “absolutely not” afford her.

‘History speaks for itself’

Having begun her coaching career in the United States 20 years ago, Hayes was assistant to Vic Akers at Arsenal from 2006 to 2008 and helped the Gunners win an unprecedented quadruple as they took all three domestic trophies and the Women’s Uefa Cup in 2007.

She was Chicago Red Stars manager from 2008 to 2010 and continued to coach in the United States until taking over at Chelsea in the summer of 2012.

Under her leadership they have become one of the dominant forces in the English women’s game, winning four WSL titles, the 2017 WSL Spring Series, two Women’s FA Cups, two League Cups and the 2020 Community Shield.

The club has qualified for the Champions League in five of the past six seasons, reaching the semi-finals in 2018 and 2019 as Hayes has assembled a squad of international stars such as Sam Kerr, Fran Kirby, Pernille Harder and Erin Cuthbert.

“History speaks for itself, and we are really proud of what she has achieved in the past nine years, not just at the club, but also for the growth of the women’s game,” Chelsea director Marina Granovskaia said.

“We are delighted Emma has committed to stay at Chelsea. It is phenomenal and a real credit to Emma for her continued passion, hard work and dedication to the sport.

“We have no doubt there’s more exciting times to come and look forward to watching her take Chelsea women to even greater heights in the years to come.”