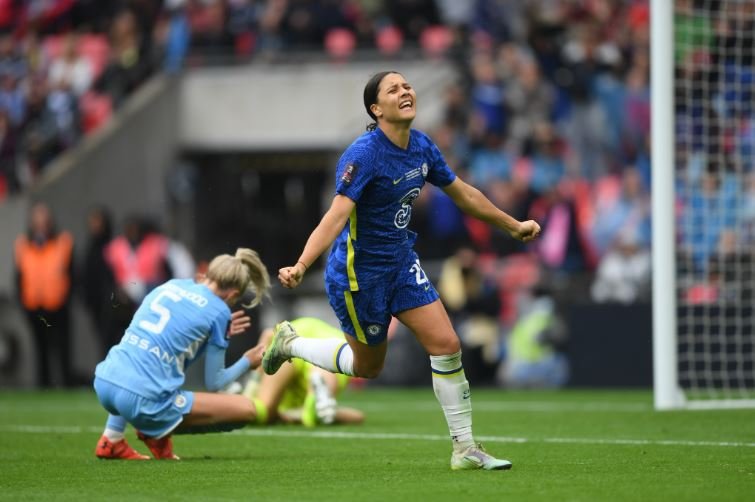 Chelsea defended their Women’s FA Cup crown and completed the Double in dramatic fashion as Sam Kerr scored the winner against Manchester City in extra time in front of a record crowd at Wembley Stadium.

Kerr, who put Chelsea 1-0 up in the first half, kept her cool to slide in a deflected winner after City had twice come from behind.

That came after Erin Cuthbert’s stunning strike had put Chelsea in front, following Lauren Hemp’s curler for City on the stroke of half-time.

City had several chances throughout the match – Hemp was denied by goalkeeper Ann-Katrin Berger, Laura Coombs fired inches over the bar, while Caroline Weir and Georgia Stanway had efforts deflected wide.

Chelsea’s resilience and determination to put bodies on the line was crucial in their victory as Jess Carter’s sliding intervention stopped Ellen White from scoring for City in extra time before Kerr’s decisive goal.

The Blues, who have now won this competition four times under Hayes, celebrated completing the domestic Double in front of a crowd of 49,094 – the highest in Women’s FA Cup history.

It is their second piece of silverware in seven days and is the perfect send-off for departing trio Ji So-yun, Drew Spence and Jonna Andersson, who have all played their role in Chelsea’s success this season.

It was a tight encounter at Wembley between two sides who have developed a strong rivalry in the WSL, but until this season had not met in a domestic cup final.

Gareth Taylor’s side beat Chelsea to silverware in March when they won the League Cup after coming from behind, and they threatened to do the same again.

Moments of quality in normal time kept the teams level – Kerr headed in Millie Bright’s deep cross for the opener, Hemp cut inside before curling in an equaliser, Cuthbert struck home off the underside of the crossbar, before Raso’s smart run in behind made it 2-2 with minutes remaining.

But it was a swift counter-attack – and Kerr’s unwavering form in front of goal – which proved the difference.

Kerr and Jessie Fleming were both through on goal with only Alanna Kennedy back for City, and despite the defender’s best efforts she could do nothing to stop the shot nestling into the bottom corner.

City will be disappointed as they had plenty of chances at Wembley, but Kerr has now scored in Chelsea’s past three domestic cup finals and once again will dominate the headlines.

Chelsea’s players fell to the ground at full-time after a gruelling 120 minutes, while manager Hayes punched the air on the sidelines – the Blues’ dominance of English football continues.

‘The best FA Cup final I have witnessed’ – analysis

Every player was willing to do anything and everything to get their team over the line.

Everything that epitomises women’s football at this moment in time was on display this afternoon. That is the best FA Cup final I have ever watched.

What an epic encounter – not one team ever lying down. Both were going toe-to-toe right to the very end. Every bit of energy has been spent between those two teams.

England and Everton midfielder Izzy Christiansen on BBC One:

The athleticism and hunger and desire, the desire to put yourself on the line and do anything you can for your team.

The job Sam Kerr does off the ball for the team is remarkable. To have someone like that in your team is amazing.