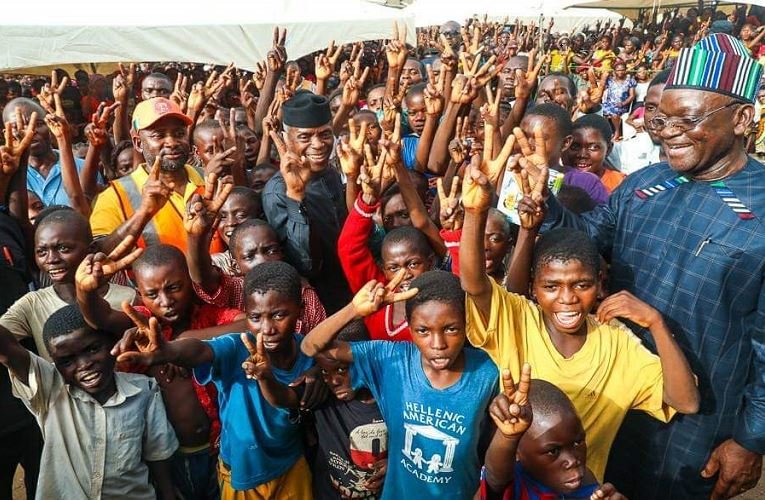 Steve Harvey, the notable American television host and actor, commenting during the 50th year anniversary of the United Arab Emirate, noted that it was the love of the leaders for their people that brought massive innovation and development to the land that was once a desert.

He commended the leadership of the United Arab Emirate for caring about their people. Indeed, John Maxwell, the world’s foremost leadership expert, once said that “people don’t care about what you know until they know that you care”.

As a caring leader Osinbajo, in commemoration of his 60th birthday in 2017, established the North East Children’s Trust to provide education, care and support services to children affected by the insurgency in Adamawa, Borno and Yobe States respectively. Modern boarding school facilities were built for the children.

Within the five years of birthing the vision about 154 pupils have graduated from the school. But for PYO, those children would have been left uneducated with a forlorn future. Osinbajo has an enduring passion for caring for the less privileged or the displaced in society.

About 20 years before his IDP educational initiative, PYO and his wife, Mrs Dolapo Osinbajo, using their personal resources and leveraging their networks, started feeding destitutes under bridges in Lagos on a weekly basis.

On behalf of the President, PYO personally visited the South-South Region of Nigeria to engage the militants and all stakeholders in the Niger Delta crisis in 2017. The people of Niger Delta, knowing how much Osinbajo cared, agreed to allow peace to reign. All Nigerians know that the engagement has brought peace and development to that region.

Osinbajo has proven that he is an attentive and authentic leader over the years. He refused to quit the government under PMB when the majority of Nigerians were urging him to leave because of the perception that he was not in control. He was authentic enough to admit that the buck stops at the desk of the President and Commander in Chief of the armed forces of Nigeria.

So, he has never struggled with his principal. He has remained loyal to his President Buhari even when the latter was away on medical vacation. He has never been known to publicly disagree with his principal unlike the cantankerous relationship Alhaji Atiku Abubakar had with former President Olusegun Obasanjo.

Osinbajo is the first Nigerian leader known to have visited all the 774 Local Government Areas in Nigeria. He has directly interacted with many Nigerians in remote villages, consoled hurting ordinary Nigerians in their humble abodes. An example was his visit to the parents of Hanifa Abubakar, the five-year old girl who was abducted and killed in January 2022 in Kano State. This shows that Osinbajo will care more for the voiceless ordinary Nigerians when he becomes Nigeria’s President.

He was creative in the approach he adopted for his declaration speech. Although people with warped minds claimed he was timid, the approach was not only cost effective, it also enabled him to directly reach millions of people across the globe. There has not been any other candidate who has achieved that reach.

Osinbajo’s caring heart and authenticity were the headline as he physically assisted the ageing elder statesman, Chief Bisi Akande, to walk out of the venue of a meeting held on Friday May 6, 2022 in Lagos. He did not consider himself as the Vice President or thought it demeaning to publicly offer help to an elder in need. That was a gathering that every other person present, protocol wise, was lower than him.

Osinbajo has shown that he is not only respectful but he will be a respecter of the rule of law and the rights of the citizens. During his 6 minutes and 59 seconds declaration speech, despite the strange and warped perception of his sworn enemies, Osinbajo showed respect to Nigerians all over the world.

He said, he was offering to serve “…with utmost humility…” In a historic fashion, the sitting Vice President of Nigeria displayed respect for all. “I now most solemnly and respectfully seek the support of fellow Nigerians…to work together…to build the Nigeria of our dreams in a few short years”.

The use of the word “respectfully” is rare in our polity because our leaders do not show respect to citizens but demand respect from the people. The Emir of Bauchi, Dr. Rilwan Suleiman Adamu, acknowledged that Osinbajo was respectful when the latter visited him in the palace on May 11, 2022.

“This shows the love and respect you have for the traditional institution” The acknowledgement is significant because if the Emir had perceived genuine show of respect from other Nigerian leaders before Osinbajo’s visit he would not have identified it as a strong point in favour of the Vice President. Similarly, the Emir of Lafia, on May 11, 2022  acknowledging the respectfulness of PYO declared that, “We love Osinbajo. He is the best for Nigeria.”

As a respecter of the rule of law, in the aftermath of the #EndSARS protests in year 2020, Osinbajo inspired the establishment of State judicial panels nationwide. This was a clear move to address injustice and compensate victims of extrajudicial killings and police brutality in Nigeria.

It is irrefutable that Osinbajo has proven that he is an excellent leader of people and a pragmatic manager of resources. Through his deft leadership of the Economic Sustainability Plan (ESP) Nigeria was able to exit the first recession and another recession during the pandemic.

Vice President Yemi Osinbajo accompanied by Governor Ikpeazu and others at the National War Museum, Umuahia, Abia State during the 50th anniversary of Biafra

He is at home with all classes of people and has the uncanny ability to engage in robust discussions on economy, agriculture, environmental climate change, information technology, arts and culture. Even at international fora where he has been privileged to represent President Muhammadu Buhari, Vice President Yemi Osinbajo has been able to proffer workable solutions to intractable problems.

Good governance runs on clearly articulating how agreed objectives shall be achieved in a timely manner. This is the forte of Osinbajo. His strategic approach to issues was highly on display in the brief period he acted as President on behalf of his principal, Muhammadu Buhari. The executive order he signed on ease of doing business in Nigeria remains a classic economic decision.

Although he has been maligned for his genuine intentions to complete the programmes and projects started by the administration of President Buhari, the strategic objectives of his commitment cannot be wished away. First, Osinbajo was a leading participant among the eminent Nigerians who drafted the manifesto of the All Progressive Congress (APC) at inception. He therefore has a moral burden to pursue the implementation of the party’s pragmatic manifesto.

Truth be told, every government exists in a continuum. The government of President Muhammadu Buhari has ensured the completion of almost all the projects started and abandoned by his predecessors. This is a mark of a good leader. The hands-on approach of PYO will make the governance structure of the nation to be agile and more impactful.

To fully understand a man’s intention you must scrutinise his words. As we conclude this discourse, please study the exact words of Osinbajo during his declaration speech. These excerpts will suffice. “We will build on the foundation laid by our predecessors.

We will need to move with much speed, intentionality and perseverance towards a prosperous, stable and secured nation…” In his call to action Osinbajo invited all Nigerians, “Let us now birth the expectation of greatness conceived many years before us.” Every word in his declaration speech indicates that good times are ahead for Nigeria under the presidency of Professor Yemi Osinbajo. He truly cares about Nigerians.

Dr Adeduro is a Productivity Consultant