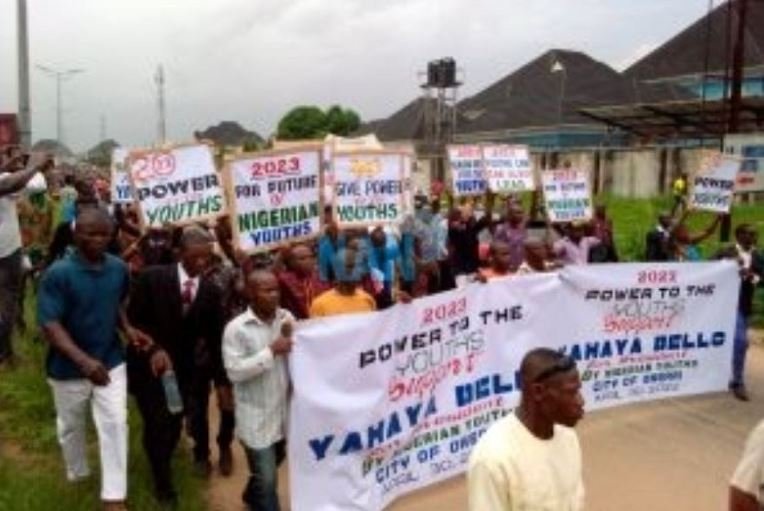 Chief Ralph Uwazuruike, leader of Movement for  Actualisation of  Sovereign State of Biafra (MASSOB), on Saturday, led thousands of South East youths  in a solidarity march  to support  the 2023 presidential ambition of Governor Yahaya Bello of Kogi.

The youths, who started the procession from the MASSOB leader’s house in Owerri, Imo, marched through the streets, carrying different placards, with inscriptions such as:  “Power to the Youths, Support Yahaya Bello”, “Youths Can Also Lead”, and “Yahaya Bello for the Youths”, among others.

They made it clear that the only solution to Nigeria’s political quagmire was for power to go to the youths.

According to them, in this regard, Bello is the right fit for the position of president of the Federal Republic of Nigeria.

Recall that Bello picked his Expression of Interest and Nomination forms at the  All Progressives Congress national secretarial in Abuja  on Wednesday.

Bello, who was the first to pay the N100 million  required for the forms, was received by a mammoth crowd of party faithful and support groups from across the country, who had been urging him to run for office of the president.

Uwazuruike advised Nigerians and party leaders to shun zoning, saying it had no place in the constitution of the Federal Republic of Nigeria

He said that his group  would support Bello to become the next president of Nigeria because he had the leadership qualities to lead Nigeria effectively.

He noted that power should go to the best in the race, adding that the Kogi governor was the best for the job.

“All Nigerians should rally round the youthful goveenor.  Today, April 30, 2022 is all about Nigerian youths.

“We are supporting  Bello for this and no one else. That he has the capacity to solve the problem of insecurity and a host of others facing the nation is not in doubt.

“This is a crucial time in the history of the country. We must give youths a chance, especially one that has demonstrated uncommon capacity, in the person of Yahaya Bello,” he said.

Uwazuruike, who is also the founder of Biafran Independent Movement  said that he does not believe in a president of Igbo extraction, insisting that the contest should be thrown open.