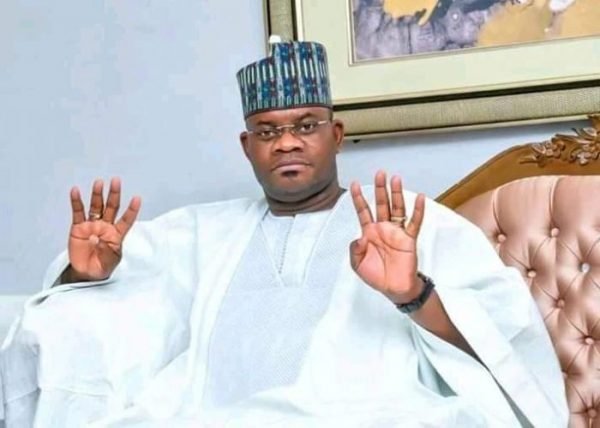 Dr Hafsat Abiola-Costello, the Director-General, Hope 23, Yahaya Bello Presidential Campaign Organisation, says the masses will be the godfather of Governor Yahaya Bello of Kogi, when he is elected president of Nigeria.

Abiola-Costello stated this while addressing a World Press Conference in Abuja on Sunday on the candidacy of Bello for the 2023 presidency.

She said the fact that Bello was independent and never accepted to have a godfather was a big plus for him, noting that the Nigerian people (masses) would be his godfathers once elected President.

“I am leading this campaign because I believe in the candidate.

“I think that the Nigerian people deserves to listen to Yahaya Bello. He is exceptional, he has certain qualities even beyond anything that I have said.

“The people that will be the godfathers of Bello when he becomes president are the people of Nigeria, and it is about time that we have that,” Abiola-Costello said.

FILE: Crowd at the 2023 declaration by Governor Yahaya Bello of Kogi state

Reacting to the possibility of Bello emerging APC candidate considering perceived heavyweights in the likes of Asiwaju Bola Tinubu, Vice President Yemi Osinbajo vying for the ticket, Abiola-Costello said that Bello would defeat other aspirants in the forth-coming primaries of the party in a free and fair contest.

The D-G, however, said though it was clear that Yahaya Bello had resisted the idea of godfathers for long, he would carry the older politicians along when be becomes the president of Nigeria.

“It is good that you said heavyweights. But he will win in a free and fair contest.

“His chances are actually the best of the group because in a competition, it is about the voters and 60 per cent of Nigerians are under 30.I am his Director-General because I believe in him.

“There have been a ground swell in our country by young people to play a bigger role in our political affairs.

“Nigerian young people are ready to take more responsibilities in the governing of our affairs and this is the young people’s candidate.

“But we really value and appreciate the heavyweights and those you call tested politicians, and they can be sure that if, God willing, we have president Yahaya Bello come 2023, he will carry them along, he will be consulting them and seeking their counsel.

“He will be wanting to build on their networks and resources because the country belongs to all of us, it belongs to the tested politicians and most especially, the young people of Nigeria,” the campaign D-G said.

On zoning, she said that the APC as of today had thrown open the contest, not restricting it to any zone, noting that everyone was eligible to contest regardless of the zone.

“At this time, the APC has said that all aspirants are free to contest. They have given no restrictions by zone and we are guided by that and our aspirant has the freedom to put his ambition forward.

“I can assure you that his aspiration has been done with a lot of consultations from within the party to the highest level and there have been no reservations to his aspiration…The support across Nigeria is overwhelming,” she noted.

Abiola-Costello described Yahaya Bello as a unifier which her late father represented, adding that when he emerged, he would also tackle issues of poverty, insecurity and other challenges facing the country.

“MKO was such a man. This Gov. Bello is also such a person. In his own cabinet in Kogi, all six geopolitical zones are represented.

“This is also somebody that fights for young people. His government has 95 per cent of young people in his cabinet.

He doesn’t just use them for campaign, he put them in government with opportunity to have dignity,” she said.