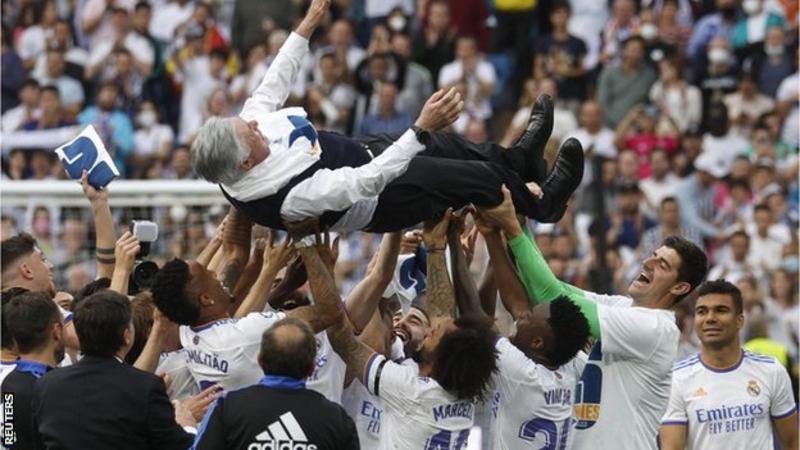 Carlo Ancelotti became the first manager to win the league in all five of Europe’s major leagues as Real Madrid beat Espanyol to win La Liga.

They are 17 points clear of second-placed Sevilla with four games to play.

Ancelotti has also won titles in Italy’s Serie A, France’s Ligue 1, the Premier League in England and the German Bundesliga.

Real needed only a draw to win the title, but victory was never really in doubt once Rodrygo stroked home from just inside the area.

The Brazilian doubled Real’s lead a minute before the break when he robbed Sergi Gomez of possession on the edge of the penalty area and fired low into the bottom corner.

Asensio finished off a rapid counter-attack before Benzema – rested with Wednesday’s Champions League semi-final against Manchester City in mind – came off the bench to sidefoot home from Vinicius Jr’s cutback.

Rodrygo has scored four goals in the past five games

Ancelotti was lured back for a second spell at Real last summer following the departure of Zinedine Zidane, quitting Everton after 18 months at the Premier League club.

The 62-year-old won five major titles in two years at the Bernabeu between 2013 and 2015, including ‘La Decima’ – their 10th European Cup – but the Spanish title eluded him.

His first league title as a manager was with AC Milan in 2004, the club where he won the league twice as a player in the 1980s.

The Premier League with Chelsea followed in 2010, before Ancelotti lifted Ligue 1 with Paris St-Germain in 2013 and the Bundesliga with Bayern Munich in 2017.

Ancelotti’s season could end in more glory, although Real must overturn a 4-3 first-leg deficit against City at the Bernabeu.

If they do reach the final and lift the trophy Ancelotti would become the only man to win the European Cup or Champions League four times as a manager, having also led AC Milan to the trophy in 2003 and 2007.