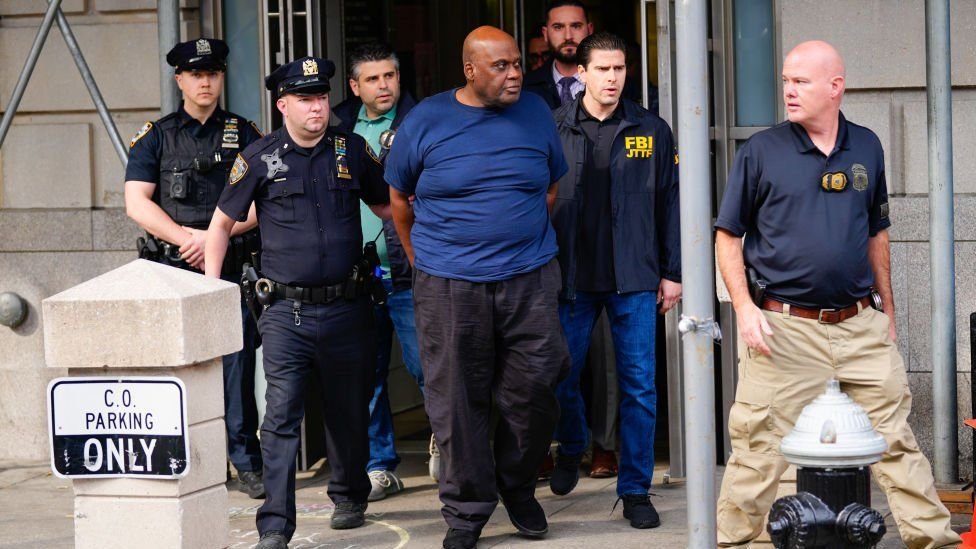 Mr Frank James was arrested "without incident"
Share This Story

Police in New York City have arrested a man suspected of shooting 10 commuters in a rush hour attack at a Brooklyn subway station.

Frank James, 62, is alleged to have donned a construction worker’s helmet, vest and a gas mask before throwing smoke grenades and opening fire.

A massive 30-hour manhunt was launched in the wake of the attack.

Mr James was taken into custody on Wednesday afternoon in Manhattan after police received a tip-off, they said.

“My fellow New Yorkers: we got him,” Mayor Eric Adams said via video during a news conference.

Officials said Mr James was the sole suspect in the shooting at Brooklyn’s 36th Street station on Tuesday morning, in which 23 people were wounded, 10 of them from gunfire. The attack renewed calls to address violence in the city’s transit system.

Keechant Sewell, New York’s police commissioner, said that Mr James was arrested “without incident”. “There was nowhere left for him to run,” she said.

Police did not answer questions about the individual who called in the tip, though the Associated Press and CNN are reporting the suspect was the one who tipped off police to his location in lower Manhattan.

Mr James will be charged on several counts, authorities said, including the violation of a federal law which prohibits “terrorist and other violent attacks” against mass transit systems. He could face life in prison if found guilty.

He had nine prior arrests, police said, and he had ties to Ohio, Wisconsin, Pennsylvania and New Jersey.

The search for Mr James was complicated by malfunctioning cameras inside the subway station. Officials on Wednesday were working to determine whether one or multiple cameras at the station were broken.

The suspected gunman escaped the scene but was linked to the attack through a rented U-Haul van. The key to the van, rented in Philadelphia, was found at the scene, along with a Glock 9mm handgun, three ammunition magazines, a plastic container containing petrol, and a credit card with Mr James’ name on it, police said.

An FBI affidavit said the agency believes Mr James rented the U-Haul in Philadelphia on Monday and drove it to New York, arriving the next day. The agency said that records showed the Glock was lawfully bought in Ohio “by an individual named ‘Frank Robert James’”.

Police have not given a motive for the attack, though authorities have said Mr James had posted black nationalist rhetoric and bigoted rants online and “made various statements about the New York City subway system”, including about homeless people on the subways and “various conspiracy theories”, according to court documents,

Mr James is expected to make his first court appearance in New York on Thursday.

More than 120 dead after tropical storm hits the Philippines