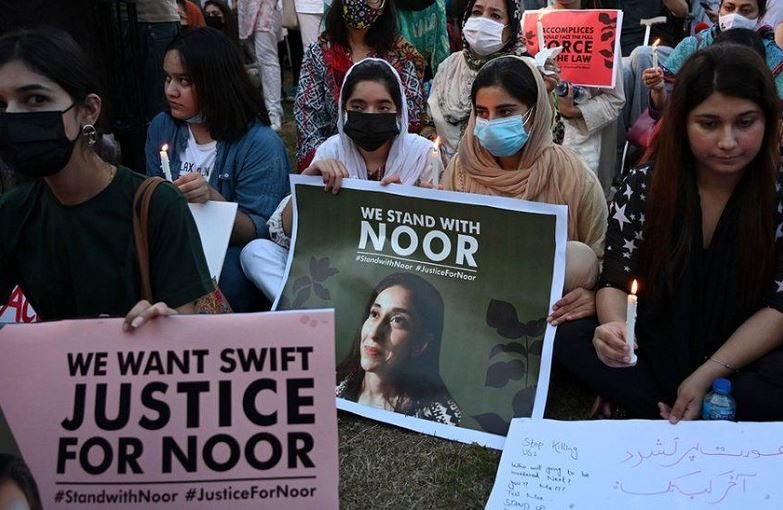 A court in Pakistan has sentenced Zahir Jaffer to death for raping and murdering Noor Muqaddam, the daughter of a former diplomat who refused his offer of marriage.

Muqaddam, 27, was beaten, raped and beheaded by Jaffer, the son of one of Pakistan’s richest families.

The brutal killing took place at his home on 20 July last year. CCTV footage showed her trying in vain to escape.

The murder caused nationwide revulsion and prompted demands for more to be done to ensure women’s safety.

Noor Muqaddam’s murder by a man she knew in the same group of high society friends had dominated headlines for months.

It brought calls for an overhaul of Pakistan’s criminal justice system, which has very low conviction rates, particularly for crimes against women.

Hundreds of women are killed in the country each year, and thousands suffer violence. Many cases go unreported.

Two of Jaffer’s household employees were sentenced to 10 years imprisonment for abetting the murder, while his parents were acquitted of trying to cover it up.

Her father, Shaukat Muqaddam, called the verdict a victory for justice and said he wanted to ensure abusers and killers of women in Pakistan no longer got away with their crimes.

“I am happy that justice has been served,” he said.

“I’ve been saying that this is not just my daughter’s case, it is a case for all the daughters of my country.”

He pledged to challenge the acquittal of Jaffer’s parents.

Jaffer, a 30-year-old US national of Pakistani origin, can also appeal against the verdict.

People of Borno will remain with you, Zulum tells Osinbajo