Protest over my disappearance saved me - Mbaka
Advertisement 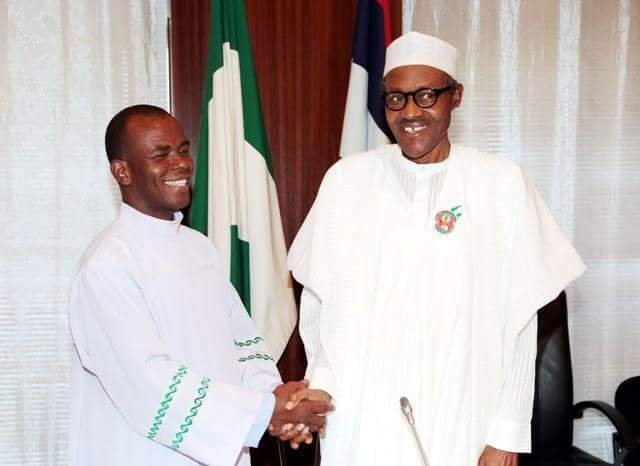 There was drama in Enugu State yesterday following the absence and reappearance of the spiritual director of Adoration Ministry, Rev. Ejike Mbaka.

He had been scheduled to attend his usual morning prayer session, but did not show up.

It was reportedly announced at the Adoration Ground that Mbaka went to see the Catholic Bishop of Enugu Diocese, Most Rev. Callistus Onaga. Members were told that Onaga asked Mbaka to come to his house and that he had not returned since.

The members then proceeded to the Bishop’s residence, but were told that Onaga was not in.

Amid the protest, some irate youths vandalised Onaga’s residence.

The youths, suspected to be members of the Adoration Ministry and numbering over 1,000, accused the bishop of masterminding Mbaka’s arrest.

Worshippers and other residents soon took to the streets following the rumour that Mbaka had been arrested.

They waved leaves and tree branches as they chanted solidarity songs on major roads.

Some claimed he must have been arrested by the Department of State Services (DSS), following his spat with the Presidency.

The fiery Catholic priest reappeared a few hours later as he was driven to the protesters in a Toyota RAV4.

He was seen in a video clip in an open roof car waving at the members who surrounded him, accompanied by policemen.

More people trooped out to jubilate over his return.

The priest arrived at the Catholic Bishop’s residence in a motorcade amidst shouts of joy from his Adoration faithful around 2.45 pm.

He stopped in front of the Bishop’s Court and addressed his church members.

The priest urged them to remain calm and return to the Adoration Ground for further information.

Mbaka hinted that he was held against his will and that their protest may have aided his return.

It could not be immediately confirmed where Mbaka went to.

In a video clip shared online, Mbaka said: “I’ve not been around since yesterday.

“I don’t know what I did. To tell you the truth, if not for what you did (the protests), I would not know what would have happened to me.

“Nobody will stop me from doing the charity I am doing. May God protect you for me. You went for prayer and from there you went to protest like sheep without a shepherd. It hurt me that I had this sort of problem.”

There was a heavy presence of military men at the bishop’s court as they struggled to control the crowd that turned out to welcome the reverend father.

Mbaka had accused President Muhammadu Buhari of failing to address rising insecurity and called for his resignation.

Presidential spokesman Garba Shehu said Mbaka was bitter about being denied a contract.

The cleric admitted taking contractors to the President but claimed it was not for personal benefit even if he deserved one.

Mbaka was an ardent supporter of Buhari, especially in the buildup to the 2015 general elections.

As news of his “arrest” and “disappearance” spread, Ohanaeze Ndigbo Youth Council said every effort to trace him had failed.

Its President-General, Mazi Okwu Nnabuike, said: “We have it on good authority that his aides have neither seen nor heard from him since Tuesday.

“Calls put to his mobile line have also remained unanswered. This has now prompted us to issue this alarm as we would not take it lightly should anything untoward happen to him.”

The DSS said reports that it arrested Mbaka were untrue.

Its spokesman Dr. Peter Afunanya said: “This is not true. Fr Mbaka was not picked up by the DSS. Rev Fr Mbaka is not with the DSS. The DSS did not pick him up, please.”

According to NAN, Catholic Diocese Communication Director Rev. Benjamin Achi and the police spokesman in Enugu, Daniel Ndukwe, could not be reached for comments as they did not pick their calls.