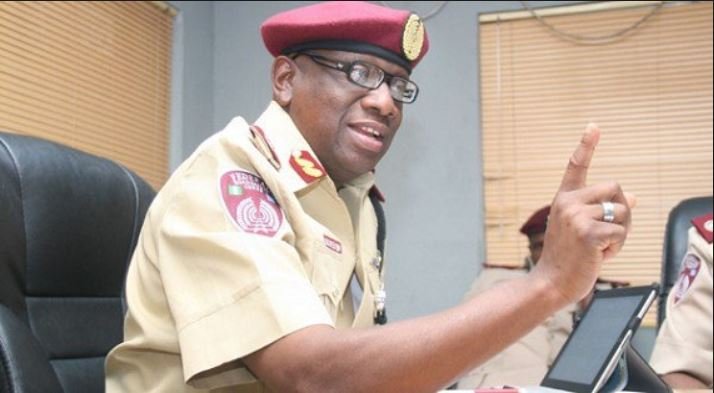 The Federal Road Safety Commission (FRSC) has urged transport companies nationwide to guard against overloading and speeding at this Yuletide.

The Corps Marshal, Dr. Boboye Oyeyemi, made this call at the end of the year parley with transport Union stakeholders as one of the programmes toward adequate preparation for end of the year activities on Tuesday in Abuja.

Oyeyemi said that the commission would penalise any defaulter caught while violating the rules and regulations of traffic management.

He stressed that overloading of vehicles could make the drivers to lose control while driving, especially when on a high speed, adding that crashes occurred also at night.

He said that the issues of tankers and trailers using the fast lane for their permanent movement was a great concern to the commission.

“Recently, we had a record of a trailer conveying 103 people that involved in an accident. 91 persons were seriously injured while 12 others died at the spot.

“We need to join hands to tackle this excessive overloading of goods with people. Trailers are not to convey human beings. We must come together to fight this menace of overloading.

“Motorists should avoid speed limit violation, dangerous driving as well as phoning or texting messages on phones while on the wheel, ” he said.

The Corps Marshal said that the support of road transport workers would help address the issue with overloading, adding that FRSC would ensure crashes does not occur this Yuletide.

He, however, urged all transport union to call Toll free number “201” to remove broken vehicles on roads to avoid obstruction during the festive period.

National Chairman, Petroleum Tankers Drivers (PTD), a branch of Nigeria Union of Petroleum And Natural Gas Workers (NUPENG), Mr Akanni Oladiti assured FRSC that effort would be put in place to ensure people and goods were not conveyed together during the Yuletide.

Oladiti said that the association had been working tirelessly to ensure there would be no loss of lives during and after the festive season.

He called for support from other transport Union to ensure the safety of people all over the country in the ember months.

“We will make efforts at ensuring that tankers and trailers do not operate at night to have a crash free celebration this year.

“We would also put into place measures to address overloading, speeding and other offences that could lead to road crashes to ensure the safety of the people,” he said.

Bataiya commended the FRSC for addressing issues concerning the road traffic management, adding that more needed to be done.

He said that measures should be put in place to ensure a crash free celebration, saying that stakeholders at all levels should collaborate on the safety of lives and property.

“They should all come together and do something about overloading and speeding. It is a serious issue everyone must be involved in.

” We need legislative and enforcement agencies to punish drivers who would not adhere to instructions and obey the traffic rules and regulations, ” he said.