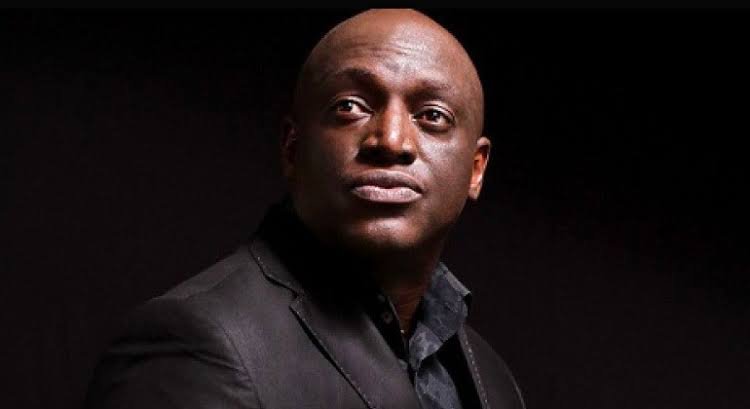 The burial of Mr Sammie Okposo, who died suddenly on the 25th of November, was attended by his colleagues, family and friends.

Famous Nigerian Gospel singer, Sammie Okposo, was finally laid to rest at a private cemetery in Ikoyi after a Church service on Thursday.

The senior pastor of House officiated the ceremony on the Rock, Paul Adefarasin, alongside the lead pastor at The L.O.G.I.C (Love Of God In Christ) Church, Flourish Peters.

The week-long funeral ceremony will be wrapped up on Sunday with an Outing Service at The Logic Church, Lekki, Lagos.

The singer was known for his Sammie Okposo Praise Party (SOPP) live concert. He held the last edition in November, days before his sudden demise.

In 2004, Okposo was invited to perform at the Martin Luther King Day and July 4th Independence day Celebration, respectively, by the American ambassador to Nigeria.

The internment ceremony was profoundly emotional and tear-filled. The late singer’s wife, Ozioma, led others as they laid wreaths on his graveside.

Visibly shaken, she also performed the dirt-pouring ceremony with some assistance.

Also among those who laid a wreath on the Okposo’s resting place was gospel artiste Nikki Laoye, his friend.

Moments later, she posted a clip on her Instagram page of herself in tears, declaring love for the departed singer.

Delivering a sermon at the Okposo’s Service of Songs which was held on Wednesday at the House on the Rock Church, Pastor Adefarasin described his impact as immeasurable.

Addressing Okposo’s family, Pastor Adefarasin cast their minds back in history immediately after the church’s birth, when the early Christians faced persecution and violent deaths.

He also drew examples from Christ, who died on the cross and rose on the third day, urging the family and those present to use that perspective through their moment of grief.

“Make it through each day knowing that sammie, if he were able to stand here today for a moment to say something to you, is to live on long and strong. That’s the best way to honour the memory of a great man.

“It won’t be easy, but it will get easier every day. And it is our opportunity, who knew him on different levels of intimacy, to cease the moment of an open wound, for it is there that God pours strength. In our weakness, his power is made perfect,” Pastor Adefarasin said.

Thanking the Okposo family for lending their son to God’s house, the Body of Christ and many places over the years, the preacher noted that the late Okposo has become iconic and global.

“His legend and his legacy will live forever. I’m certain because I know. And I know of his faith in the cross. He believed in Jesus till the end,” he added.

The late Okposo, who had footprints in the Nigerian music and movie industries, is credited with creating many soundtracks in Nollywood.

Among them is the acclaimed movie, ‘Osuofia in London’

Nurturing a love for music

Also, Okposo’s uncle, Pastor Sylvester Ubiene, recalled how he lived with the singer’s family in the 70s when Sammie was about four years old.

According to him, at age nine, young Sammie was so interested in music ministry as his mother was in the choir. It was at that point that he learnt to play the drum, the keyboard and other instruments.

“He loved music, and he loved the Lord. I pray that his soul will continue to rest in the bosom of his maker,” he said.

“We all went to church together. He was stubborn; you can’t remove that stubbornness; he was tough. He had energy. He just loved the lord because we were all brought up in the way of the Lord. He knew his roots, and he always stuck to his roots. We will miss him,” she said.

Emotions were rife on Tuesday night, and friends and colleagues gathered to bid Nigerian musician the late Sammie Okposo farewell.

The service of songs, which took place at La Madison Place in Oniru, Lagos State, was anchored by his dear friend, comedian and TV host, Babatunde Adewale, also known as Tee A.

Speaking on the life of the late singer, his older brother, Hillary Okposo, who is based in the Netherlands, described him as a church boy from the beginning.

Film director Kingsley Ogoro described the late singer, who is survived by a wife, two children, three sisters, five brothers and 22 nephews and nieces, as a bitter pill to swallow.

“I guess he answered God’s call. Sammie started with us many years ago at Tafawa Balewa Crescent when Kingsley Ogoro and I started Klink Studios. And Tafawa Balewa crescent turned out to be the hub of entertainment.

“There is never a dull moment with him. I’ve seen Sammie rise like a phoenix repeatedly and stand tall. I’m sure somewhere out there, he’s looking at us and saying, ‘is this all for me?’ Yes, sammie. We are doing this for you, the phoenix,” he said.

The night featured a rendition of songs by several individuals and groups, including one by the Tafawa Balewa crew made up of veteran actors and musicians, including Segun Arinze, Zubi Enebeli, Yinka Davies and others.

The late Sammie Okposo was the ninth of 10 children. He is a prince of the royal house of Odueka, Iron Kingdom in Isoko, Delta State.

He was a music producer, psalmist, entertainment consultant and the CEO of Zamar Entertainment.

Born on the 30th of May 1972, he officially launched his music production career in 1995 when he joined the Nigerian Movie Industry as a SoundTrack Producer and eventually ventured into music producing