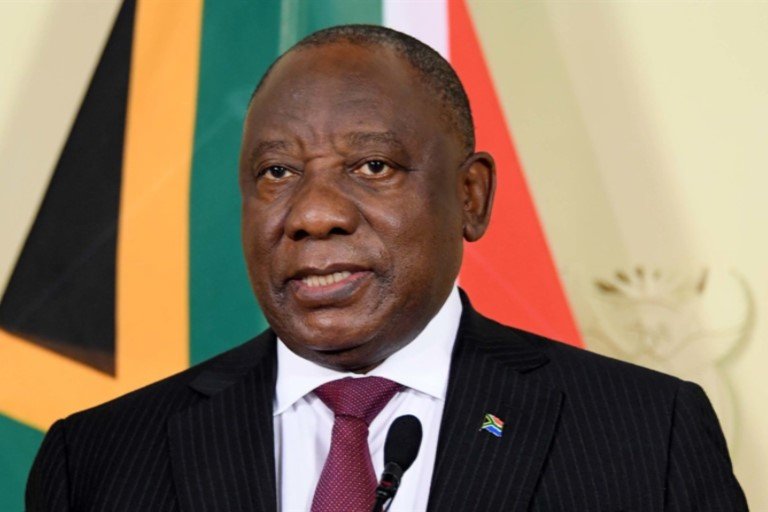 South Africa’s President Cyril Ramaphosa has just won another term as head of the governing African National Congress (ANC) after a turbulent few weeks in which it looked like he might resign, or be pushed out by his own party, over an alleged corruption scandal.

But has Mr Ramaphosa emerged stronger or is he – and with him the ANC and even the national economy – on an unstoppable downward trajectory?

There was a time, some five years back, when many South Africans flirted, earnestly, with the belief that their country had found its saviour – and that Mr Ramaphosa, a sober man of obvious integrity and experience, would put a stop to a grim decade of corruption and economic decline.

In fact, that was Mr Ramaphosa’s own sales pitch – his earnest promise of urgent reform, of renewal, for a young democracy that knew it had lost its way.

Today, some here still believe that he is a winner. After all, he has just emerged victorious, once again, from his party’s bruising national elective conference.

And he has, against strong headwinds, begun the slow process of rebuilding South Africa’s state institutions – the prosecution service, the giant utility monopolies, the tax revenue service – which had been hollowed out by corruption under former President Jacob Zuma.

Surely now – having increased the size of his majority since he first took over the ANC in 2017 – Mr Ramaphosa will finally feel secure enough to accelerate those reforms, to sack the crooks and deadwood and unrepentant political enemies in his cabinet, unleash investment, transform an unequal society, and find a way to tackle soaring unemployment and a failing education system.

Those who believe Mr Ramaphosa is still the best – maybe the only – politician in the ANC with a chance of keeping this country on a vaguely even keel, acknowledge that his corruption scandal, involving a burglary and botched investigation at the president’s game farm, was badly handled by his lawyers, and has certainly smudged his reputation.

But they see it largely as a political problem – an attack stage-managed by his ANC rivals – rather than a fundamental crisis of integrity.

But this glass-half-full approach to the president, and to South Africa itself, is under growing strain.

That is partly down to Mr Ramaphosa himself. Leaving aside the huge holes in his account of what happened in that corruption scandal – the cash in the sofa, the signs of a cover-up – even his most generous critics see him as a maddeningly cautious figure, someone who seems to lack the appetite, or courage, to confront his enemies head-on at a time when the political stakes are so high.

He is, in many people’s eyes, the sort of man who would bring a notepad and Zoom link to a knife fight.

The clearest evidence for this can be found inside his own cabinet, where ministers who are openly, and provocatively, hostile to Mr Ramaphosa and his agenda still keep their jobs.

The president’s loyalists say he is hamstrung by ANC rules, and that his slow, institution-focused approach is, nonetheless, delivering results, and exposing the shallow antics of his rivals.

But tell that to millions of South Africans who are sitting in the dark today, with businesses failing because of long daily power cuts, as the country’s electricity system crumbles under the weight of decades of mismanagement, corruption, and now, of alleged overt sabotage.

And it is here that we get into the second main criticism of a glass-half-full approach to South Africa.

This country’s problems – the argument goes – simply cannot be solved by one man, however well-intentioned.

For almost three decades now, the country has been governed by the former liberation movement, the ANC, which is now consumed by fratricidal power struggles driven not by policy or personality issues, but by rival attitudes to corruption and looting, and the desire of powerful figures to avoid accountability and prison.

Mr Ramaphosa – still more popular than other national politicians – may be able to keep the ANC in power for one more election cycle (although even that is no longer guaranteed) but the party is tired and broken, and, in the eyes of many, badly needs a spell in opposition.

Which brings us back to South Africa’s long, daily power cuts – the clearest proof of the ANC’s crisis, as manifested in its failure to provide enough electricity for the continent’s most developed economy.

Mr Ramaphosa has tried to push through reforms, to harness the nation’s almost limitless supplies of renewable solar and wind power, but – it is widely believed – he has been blocked and sabotaged by forces within his own cabinet and party.

So what next? Can the ANC renew itself under a re-energised Mr Ramaphosa, as it so often promises, and if not, will the party shuffle quietly towards electoral defeat?

Both options seem unlikely. A period of deepening political uncertainty beckons, ripe with opportunities for new coalitions and political movements, and fraught with serious risks for a struggling, and increasingly disappointed, nation.