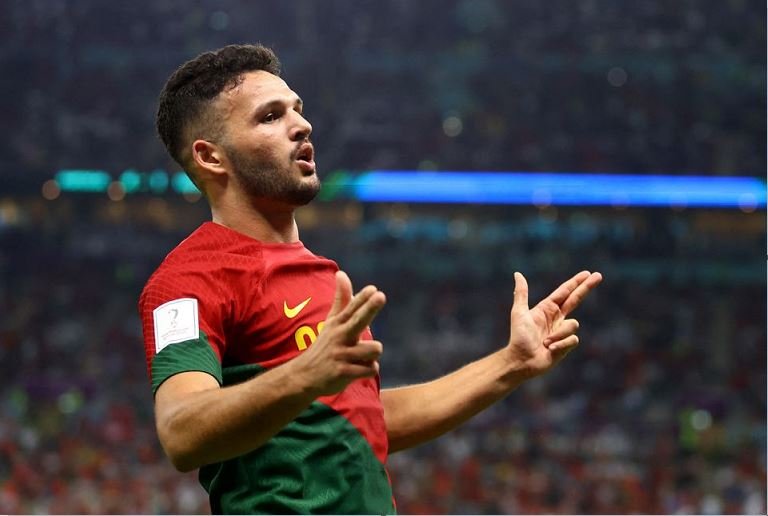 Goncalo Ramos scored a stunning hat-trick as a slick Portugal thrashed Switzerland 6-1 on Tuesday to storm into the quarter-finals of the World Cup for the first time since 2006.

Portugal coach Fernando Santos took the brave call to bench Cristiano Ronaldo and was rewarded with an artful display from his side as they set up a last-eight clash with Morocco, who stunned Spain in a penalty shootout earlier on Tuesday.

Ramos, making his first start at the World Cup, gave Portugal the lead in the 17th minute after latching onto Joao Felix’s pass and smashing the ball past Swiss goalkeeper Yann Sommer at his near post from an acute angle.

The 21-year-old Benfica striker scored his second, and Portugal’s third, six minutes after the break by getting onto the end of Diogo Dalot’s low cross and he completed his hat-trick in the 67th with a delicate dinked finish.

Pepe had doubled Portugal’s lead with a powerful header from a Bruno Fernandes corner after 33 minutes and Raphael Guerreiro rifled in their fourth in the 55th before Rafael Leao completed the rout in added time with a curled finish.

Manuel Akanji scored a consolation goal for the Swiss from a corner just before the hour.

Cristiano Ronaldo’s absence did not remove the spotlight and attention from the fading superstar but actually made it shine even more brightly in his direction at Lusail Stadium.

Ronaldo was swarmed by photographers in the dug-out after the national anthems then received a pop star’s welcome when he came on as substitute after 74 minutes following prolonged and noisy demands for his introduction, particularly from the locals who had come to see him in the flesh.

The focus should not be Ronaldo though.

The credit must go to a Portugal team who looked more mobile, fluid and unified without the man who is currently searching for his next club having left Manchester United.

Portugal is a team full of talent even without Ronaldo and Ramos made an instant impact, not just with his goals but also his movement and team play.

And the sweet late strike from Rafael Leao was another demonstration of Portugal’s bright future, one that hardly looked in jeopardy without Ronaldo as they swept Switzerland aside.

Portugal coach Santos is a stern-faced individual but a shrewd operator with a Euro 2016 triumph on his CV. He would be fully justified in allowing himself a smile after his brave, but ultimately correct decision, to leave out his team’s towering presence.

This was such a complete performance from Portugal that there is surely no starting place for Ronaldo in the upcoming World Cup quarter-final against Morocco.

Switzerland bow out with a whimper

Switzerland made their way into the World Cup last 16 with a reputation as a stubborn, well-organised and hard to beat team under the direction of experienced coach Murat Yakin.

If so, this was a pale imitation of their true quality as they were picked apart by Portugal and barely threatened goalkeeper Diogo Costa, with Xherdan Shaqiri – their main hope of inspiration – rendered anonymous throughout.

Switzerland may regard reaching the knockout phase as par for the course at this tournament but there must still be huge disappointment at the meek and mediocre manner in which they have left Qatar, because previous evidence suggests they are a much better side than the one thrashed here.

Morocco knock Spain out of the World Cup