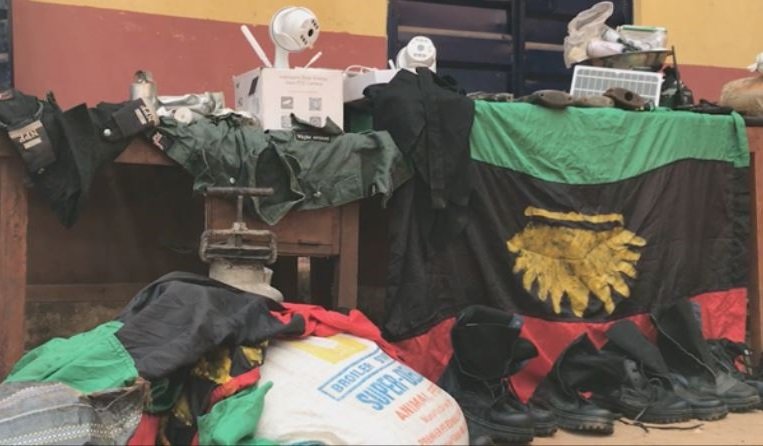 The police said the uncovered local bomb factory is capable of causing colossal damage to buildings and eradicating any living thing in and around the area if detonated.

The IEDs camp controlled by IPOB is located at Obegu, a boundary area between the Onicha-Isu and Ishielu Local Government Areas of the state.

Speaking to journalists on the findings by the police on on Thursday, the police spokesman, SP Chris Anyanwu, said officers and men from the tactical teams, stormed the camp sequel to credible information gathered that hoodlums were operating and wreaking havoc in the state within Ishielu axis.

He said, “What we have here today is a complete bomb factory, the biggest so far recovered in the whole of the South-East. In fact, these IEDs are capable of destroying a very large building and doing a whole lot of massive killing of any living thing around the area.

“You can see the whole component ranging from gelatin (very large quantity), there are safety fuses, they collate all these and fabricate it themselves.

“From our EOD expert in Ebonyi State, one of these hand grenades they manufactured is capable of wiping out the whole of this premises and killing everybody here, even though they don’t have sharp nails.

“The gelatin is so powerful that the pressure and the shock can kill everybody within the perimeter where it is thrown. You can also see the uniforms of some of our colleagues that these miscreants killed during several attacks at police stations.”

Anyanwu said a joint effort with a team of detectives attached to Ohaukwu Division led to the arrest of Sunday Ubah a.k.a Bongo, the commander of the IPOB/ESN in Ebonyi State.

This clamp down on those the police described as hoodlums also came with a price as some police operatives sustained minor bullet injuries while two of the hoodlums were neutralized, as others escaped with various degrees of bullet injuries.