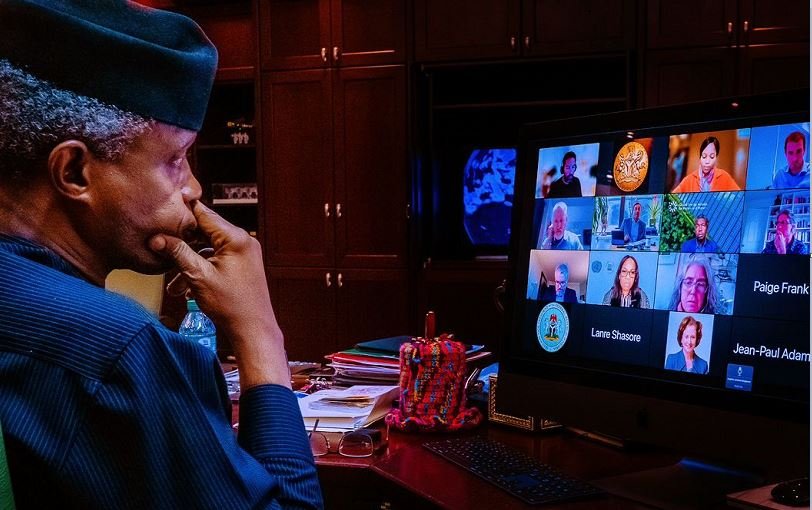 Hydra-headed challenges at national and global levels, such as poverty, inequality, and global warming alongside a world that is increasingly defined by technology, would require profound thinking and planning, according to Vice President Yemi Osinbajo, SAN.

Osinbajo spoke at the Presidential Villa during the inauguration of the Board of Trustees for the National Institute for Policy and Strategic Studies’ Endowment Fund and the institution’s Academic Advisory Committee.

“In the coming years, NIPSS will be called upon to interpret, predict and plan for a world literarily on technology steroids, challenged by poverty and inequality and in a mortal battle with disastrous warming.

This is the hydra nature of the challenge,” VP Osinbajo declared at the event submitting that NIPSS therefore should not be constrained by resources.

Prof. Osinbajo continued “…in the coming years, it (NIPSS) will become perhaps even more challenged to do much more. The coming years for many of us who are watching and studying, I think it is very evident that what we see and the challenges (not just local but global) that we will face will be of the order that will require great introspection and thinking and a lot of planning.

“So, I believe that NIPSS and what we are trying to constitute today is one that will have to plan, predict and interpret the trends of the coming years. And those trends will be many. One will be the various challenges that the world will face aside from food security, is the huge problems of poverty on a scale that appears to be increasing all across the world and I speak not just in our own region but globally.”

“And at the same time this is a world that is moving very quickly on technology, as a matter of fact, the world is moving literarily on technology steroids, it is moving so quickly that it is possible, if we are not at the cutting edge, to be left behind. And also, there will be problems (as we are seeing already) of Climate Change and all the implications for the future of our planet and the socio-economic circumstances of the world, and in particular, developing countries and of course, Nigeria,” VP Osinbajo added.

Emphasizing the need for the adoption of new ways of funding research and related activities at the institution, VP Osinbajo noted that “all the Think-Tanks in the world are reviewing their approaches to research and they are all thinking, what are we going to be required to do in the next few years.”

Tasking the new board of trustees and the institution to take up the challenge of finding solutions to contemporary issues, Prof. Osinbajo said, “NIPSS has before it an opportunity to become one of the leading and foremost thought leaders in the world in the next few years, I think that there is a real opportunity now to do so.

“I think this is the opportunity for NIPSS to really take on the mandate and use that mandate creatively to prepare Nigeria for the future and to prepare our region and the world for the future. And this is why the constitution of the board of trustees is important.”

Speaking further about the institution’s reliance on government’s budgetary allocations alone to fund research, Prof. Osinbajo noted that “we cannot have an institution of the importance of NIPSS that rely solely on government funding. It is almost absurd that the foremost Think-Tank in Nigeria will be run like a civil service institution, and it will depend, almost on a daily basis, on government budget, that is not how think-tanks are run.”

“It is more the ability to do unrestrained research, unrestrained meaning, without the constraints of resources. You should not be constrained by resources, given the enormity of the task that the institution has, which is why I think that the role of this board of trustees is very well cut out,” the Vice President added.

About expectations from the board, the Vice President expressed confidence in the ability of the chairman and members to take on the task ahead, noting that “we expect that the Board of Trustees will, aside from everything else, lead in looking for the resources that will put NIPSS in the position to be able to face the challenges of the future.”

For the Academic Advisory Committee, which was also inaugurated at the event, the Vice President noted that “…your role is strategic and important in the development of the work of NIPSS going forward. As an academic myself, I think what goes into the content of teaching, research and instruction are what will define the sorts of results we will get.”

“I would like to urge you to think outside the box as we face the challenges of the future. I would want you to look at what other Think-Tanks are doing, if one just researches what is going on all over the world, it is incredible how much is happening. It is also important for us as Nigerian academics and professionals to define what we need in our own country as well.

“I would like to urge you to look at what we are doing locally and how that can be enhanced and how NIPSS can be a champion of local ideas and research as well as paying attention to what is happening globally in research and ideas,” the VP added.

Responding on behalf of members of the two bodies inaugurated, the Sultan of Sokoto, His Eminence, Muhammad Sa’ad Abubakar, lauded the commitment of the Vice President, particularly in handling national assignments, noting that “I must commend the openness of the VP with me on national issues, he (the VP) never shies away to lead from the front when dealing with issues of national importance.”

The Sultan commended VP Osinbajo and the NIPSS management for finding them worthy to serve, assuring that “we will not fail this nation in this assignment given to us, I can attest to the capability of every member of the board and I know we will put in our best.”

The Sultan pledged to support the present management of the institution to uplift its standards to the highest level comparable to the Council for Foreign Relations in the US, the UK’s Chattam House, reassuring that “we will work very hard and hit the ground running.”

He however urged authorities to put in place a framework that will guarantee continuity beyond the present management of the institution, noting that efforts of the board must be sustained for the goal of reforming the institution to be achieved.

The other members of the board, Oba of Lagos, Oba Rilwan Akiola; Prince Julius Adelusi Adeluyi, and Dr Kalu Idika Kalu, were absent at the inauguration.

The Director-General of the NIPSS, Prof. Ayo Omotayo, introduced members of the Board, and Academic Advisory Committee before the VP formally inaugurated them one after the other.

According to the DG, the VP had suggested the formation of the Endowment Fund for a while but the realization of the idea had been constrained up until now partly by COVID-19 pandemic.

Nigerians inspired by your story, legacy, Lawan tells Buhari at 80