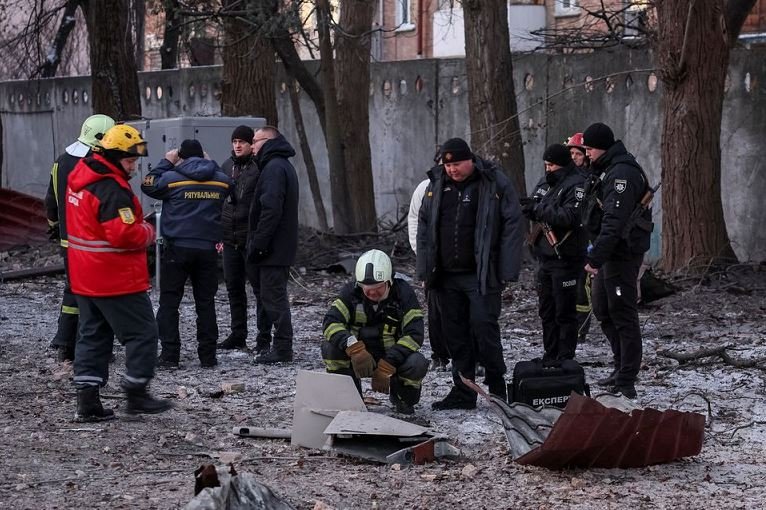 Russia on Wednesday said no “Christmas ceasefire” was on the cards after nearly 10 months of devastating war in Ukraine, even as the release of dozens more prisoners including an American showed that some contacts between the two sides remain.

Russia and Ukraine are not currently engaged in talks to end the fighting, which is raging in the east and south and reached Kyiv again on Wednesday. Tens of thousands of people have been killed, millions more displaced and cities reduced to rubble since Russia invaded its neighbour on Feb. 24.

“There is no calm on the front line,” Ukrainian President Volodymyr Zelenskiy said in a regular evening video address, describing Russia’s destruction of towns in the east with artillery: “So that only bare ruins and craters” remain.

Zelenskiy said this week Russia should start withdrawing by Christmas as a step to end the conflict, Europe’s biggest since World War Two. Moscow rejected the proposal outright, saying Ukraine must accept the loss of territory to Russia before any progress can be made.

Despite the lack of peace talks, hundreds of detainees have been freed in swaps in recent weeks. The releases – along with progress on talks to resume Russian exports of an ingredient in fertilizer and the extension of a grains deal – have shown the two sides maintain at least limited contact on several levels.

The latest exchange of dozens of detainees included a US citizen, Kyiv and Washington said on Wednesday.

The head of Ukraine’s presidential administration Andriy Yermak identified the American as Suedi Murekezi, who he said had been “helping our people” before ending up in Russian custody. The Washington Post said Murekezi was a US Air Force veteran born in Uganda.

Kirby said the scale of the ongoing violence tempered hopes for an imminent end to hostilities.

“Just given what we’re seeing in the air and on the ground in Ukraine, it’s difficult to conclude that this war will be over by year’s end,” Kirby said in response to a question about the prospects for a negotiated peace with Russia President Vladimir Putin.

“So there is active fighting going on right now. We would expect that that will continue for some time going forward.”

A police officer stands near parts of the drone at the site of a building destroyed by a Russian drone attack, as their attack on Ukraine continues, in Kyiv, Ukraine December 14, 2022. REUTERS

The head of the International Committee of the Red Cross said on Wednesday an all-for-all prisoner of war swap deal was an option in the Ukraine-Russia conflict. The ICRC emphasized it was up to the two countries to reach an agreement on the issue.

ICRC President Mirjana Spoljaric said a major swap could build confidence and that such exchanges had in the past constituted “the first step to a broader agreement”.

Neither the Red Cross or the two sides have made public precise numbers for each country’s war detainees but there are believed to be thousands of such prisoners.

Ukraine has pushed for more captives to be returned as part of talks with Russian representatives seeking the reopening of an ammonia gas pipeline through Ukraine, Reuters has reported. The pipeline is widely seen as important to lowering world prices for fertilizer made with the gas.

Violence returned to Kyiv, with the first major drone attack on Ukraine’s capital in weeks. Two administrative buildings were hit, but air defences largely repelled the attack. Zelenskiy said 13 drones had been shot down.

In one Kyiv district, where snow lay on the ground, residents said they heard the loud whirring engine sound of an Iranian Shahed drone followed by a powerful explosion at a building next to their homes.

“I want this all to be over… For (Russian President Vladimir) Putin, that bastard, to die,” said Yana, 39, who had been getting ready for work.

One attack appeared to have ripped through a chunk of the roof of a nearby walled-off brick building. It was unclear what the building was used for.

Shocked residents, wrapped up against the cold, said no one appeared to have been hurt.

The white tail of a drone could be seen in the wreckage. It had M529 Geran-2 written on it and a handwritten message “For Ryazan!!!”, an apparent reference to what Moscow says was a Ukrainian attack on an airstrip deep inside Russia this month.

Geran-2 is the name Russia gives the Shahed aircraft.

Russia, which calls the war a “special military operation”, has fired barrages of missiles on energy infrastructure since October. Ukraine’s grid operator said energy facilities had not sustained damage in Wednesday’s attack.

Ukraine wants to beef up its air defences to fend off more attacks. U.S. officials told Reuters this week that an announcement on a decision on providing the Patriot missile defence system to Ukraine could come as soon as Thursday.

Zelenskiy said Ukraine was doing everything it could to obtain more modern and powerful anti-aircraft and anti-drone systems and had made important progress on the issue this week.

In the past 24 hours, Ukraine’s military said, in the regions of Kharkiv, Donetsk and Zaporizhzhia “the enemy launched 1 air and 11 missile strikes, 3 of them on civilian infrastructure… (and) launched more than 60 attacks from multiple rocket launchers”.

And Russian shells hit the regional administration building on the central square of the recently liberated southern city of Kherson, the deputy head of Ukraine’s presidential office said.

After a series of lightning Ukrainian counter-offensives which has seen Kyiv regain control over around half of the territory Moscow captured in the first weeks of the war, neither side has made significant territorial gains in the past month.