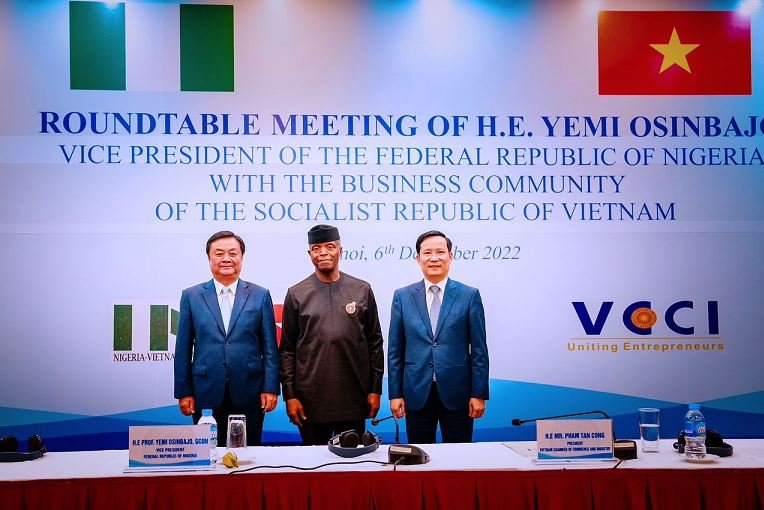 Vice President Yemi Osinbajo spent the second day of his official visit to Vietnam asserting the view that for foreign investors and businesses looking at Africa, Nigeria is the straightforward choice in the continent.

According to him, despite global tensions and COVID-induced disruptions negatively impacting economies across the world, Nigeria remains one of the best places to do business in Africa because of its market viability, creative and tech-savvy youth population and potential for growth.

Prof. Osinbajo stated this today in Hanoi during separate interactions with a cross-section of Vietnamese interests in agribusiness, tech & innovation, commerce and industry, as he continued his official visit to the Southeast Asian nation.

On Tuesday, the VP – who had earlier met his Vietnamese counterpart and the Prime Minister at different meetings on Monday – first met with agricultural experts at the Vietnam Academy of Agricultural Sciences, and then proceeded to Hanoi-based FPT University and FPT Software Company, before addressing a gathering of the Vietnamese Chamber of Commerce and Industry (VCCI), also in Hanoi. At all three events, the central plank of his speeches and remarks was how Nigeria can collaborate with these Vietnamese institutions for economic development.

Speaking at the meeting with the Vietnamese business community under the auspices of the VCCI, the Vice President noted that “Nigeria remains, perhaps, the most intuitive place to do business in Africa. Despite the economic slowdown in the aftermath of the pandemic, GDP growth has been positive for the last seven quarters, and though it slowed to 2.3% on a year-to-year basis in the third quarter of this year, it was a 9.7% increase over the second quarter.

“Apart from being the most populous country in Africa, Nigeria also has the continent’s largest economy, accounting for over 20% of continental GDP. The Nigerian private sector has undertaken large path-breaking investments in the country in agriculture, manufacturing, petrochemicals, finance, telecommunications and the digital economy,” he added.

In terms of market viability, Prof. Osinbajo noted that Nigeria continues to rank very high. “Our people are renowned for being energetic and tech-savvy, with over 60% of the population below 25 years of age.”

In the tech space, the VP said “between 2015 and last year, six Nigerian tech-based companies have been certified as unicorns. These are companies valued at over a billion US dollars each.

“Nigeria is also now home to over 200 fintech standalone companies, plus a number of fintech solutions offered by banks and mobile network operators as part of their product portfolio. Between 2014 and 2019, Nigeria’s bustling fintech segment raised over $600 million in funding and attracted a quarter of the almost $500 million raised by African tech startups in 2019 alone.”

He stated further that “the creative sector, which employs over 4 million people and has potential to add 2.7 million by 2025, is ranked the second largest employer of labour after the agricultural sector.

“We are on course to become the 3rd largest national market, based on headcount, by the year 2050. We are already the largest financial market in Africa with market capitalization in excess of US$50 billion as at the end of last year.”

The Vice President also noted that “agriculture is an area in which Vietnam has also done well. We not only have a large number of successful commercial farms owned by individuals, but in addition farms owned by companies are also springing up almost on a daily basis.”

Prof. Osinbajo also informed about investments in the downstream of the oil and gas industry “such as the Nigeria Liquified Natural Gas limited (NLNG) which is building its 7th train, or the investments by the Dangote and BUA Groups in petroleum refining, and a little-known fact that it is a company from this region, the Tolaram Group that turned around the Eleme Petrochemical Company in Nigeria from which it is now a major exporter of Urea”.

Speaking about government efforts to encourage foreign direct investments in Nigeria, the Vice President said “similar opportunities are available across all parts of the Nigerian economy and since we allow 100 per cent ownership by foreign investors, these opportunities are open to partners that wish to invest in our country.

“There is also the unconditional remittance of investment capital and profits, as well as tax and duty incentives for investors. Other incentives, including those that pertain to individual sectors, are well detailed in a ‘Compendium of Investment Incentives in Nigeria’ produced by the Nigerian Investment Promotion Commission and our tax authority, the Federal Inland Revenue Service.”

Chronicling the efforts of the Buhari Administration, the VP noted that “in the past seven years, we have focused strategically on radically improving infrastructure, to facilitate trade and investment, especially power, roads, railways and broadband connectivity.

“In the area of development of Industrial Infrastructure, I think this presents an exciting investment opportunity for both local and foreign investors looking to provide modern facilities for industries such as agribusiness, light manufacturing, construction, oil and gas, especially via Special Economic Zones etc.

“Nigeria has 17 operational Special Economic Zones with another 4 currently under development.

“14 of them are used for export-processing, large-scale manufacturing, warehousing, logistic services, tourism, food processing and packaging and technology development, while 3 are focused on oil & gas related activities,” the VP noted.

Continuing, he said, “we have also placed improving the business environment at the very heart of Government policy. In the World Bank’s Ease of Doing Business Index before the series was stopped, we moved up by 39 places between 2015 and 2020, primarily due to reforms and initiatives introduced by the Government.

“Similarly, we emerged as one of the only two African countries to be named among the top 10 most improved economies in the world by the World Bank.”

Referencing potential in the African Continental Free Trade Area (AfCFTA), the Vice President said, “in addition to our domestic market of over 200 million people, Nigeria is a gateway to the rest of Africa both as a result of our close ties with other African countries and our location on the continent, which is nearly equidistant to all parts.

“Our membership of the African Continental Free Trade Area has created incredible opportunities. Investors in Nigeria will have access to Africa’s market of 1.3 billion people and a combined gross domestic product of $3.4 trillion using Nigeria as a gateway.

“Early entrants into Nigeria in terms of trade and investment will surely reap bountiful rewards,” the VP assured.

In separate remarks, the Vietnamese Minister of Agriculture and Rural Development, Mr. Le Minh Hoan, and the VCCI Chairman, Pham Tan Cong, who were at the Chamber of Commerce event stated strong commitments towards collaborating more with Nigeria across different sectors, especially in agribusiness, an area where both countries share similarities.

Earlier in the day on arrival at the FPT University and also as the FPT Software Company, Prof. Osinbajo undertook a brief tour of the facility led by FPT’s Senior Executive Vice President, Nguyen Khai Hoan, who later briefed the VP about the company’s portfolio, including its planned expansion to Africa.

According to him, the company formed in 1999 is now making over $800 million in revenues and projected to hit $1B next year.

In his response, the VP commended the innovation at the company and milestones reached within a relatively short period of time, describing FPT as a brand with a remarkable reputation across the world.

Prof. Osinbajo urged the company to invest in Nigeria, noting that the country’s tech-savvy youth population, huge market, among other potential, make Nigeria the best place for investment in Africa, especially in the tech space.

He said “…to your point about where to go in Africa, there is no other place – Nigeria is the place (to go). And I say so, not just because I am a Nigerian or because I am the Vice President of Nigeria, but I think Nigeria has the greatest potential of the countries in Africa with respect to technology.”

Prof. Osinbajo also spoke about the emergence of multi-billion dollars Nigerian tech companies within a short period to drive home his position about the potential for growth in Nigeria.

His words: “we have a population of over 200 million people, 60 per cent of that are under 25 years; they are very young, enthusiastic, very hard working and very creative. This is the actual place to come to where you will find young people who are excited about learning, who are committed to learning and who will be a special addition of the company.

“Frankly, just looking at the numbers, I am sure that if you come to Africa and you come to Nigeria, you will more than quadruple your figures in a few years of operation.

At the Hanoi-based Vietnam Academy of Agricultural Sciences, Prof. Osinbajo, in an interaction with top officials of the institution, spoke about potential collaborations between both countries especially in the area of improved seed variety production.

He noted that “Vietnam has done that excellently well; we are greatly inspired and we look forward to collaborating with you to being able to do some of the things we need to do in the next few years in order to meet our food production targets.”

“Already there is a plan by the Vietnamese and the Nigerian governments to work together in rice production; and I think that it is interesting for us to see how we can work with the Academy as well as the Food and Agriculture Organisation; and of course, the government of Vietnam to bring that plan to fruition,” the VP added.

The Vice President was later conducted around facilities at the institution, including a smart farm where high-yield variety of vegetables are grown. He was conducted round the facility by the Vietnamese Deputy Minister of Agriculture and Rural Development, Mr. Phung Duc Tien, and President of the Institution, Nguyen Hong Son.

The Vice President also had an interaction with representatives of the Nigerian community in Vietnam.