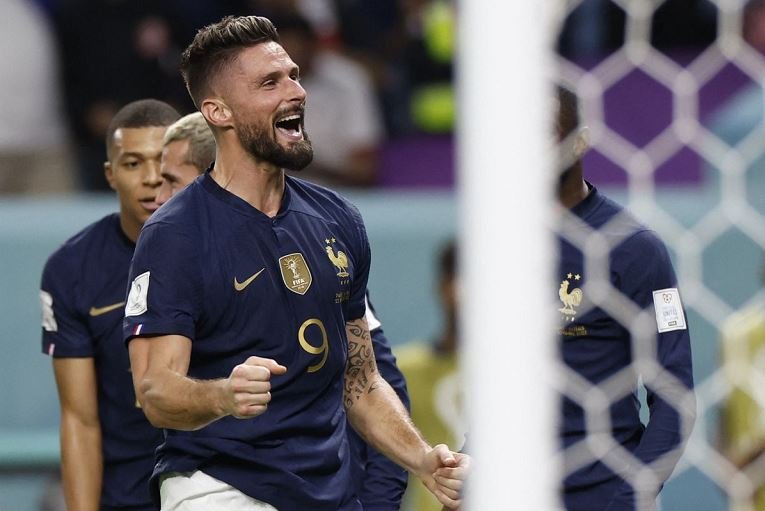 A brilliant Olivier Giroud header 12 minutes from time kept France on course to retain their World Cup title with a 2-1 win over England in a tight last quarter-final on Saturday.

Aurelien Tchouameni put France ahead with a long-range strike after 17 minutes but England skipper Harry Kane equalised with a 54th minute penalty following a foul by the French midfielder on Bukayo Saka.

Giroud headed home the winner from an Antoine Griezmann cross and England’s hopes of getting back on level terms again foundered when Kane skied a second penalty over the bar six minutes from the final whistle.

France will play Morocco for a place in the final on Wednesday after the North Africans beat Portugal 1-0 in Saturday’s earlier quarter-final.

England have been accused of making timid exits at major tournaments in the past but this charge cannot be levelled at Gareth Southgate and his players here.

They matched France and were superior for long spells, with Saka and Declan Rice outstanding, so this will be a painful loss as a route to their first World Cup final since 1966 appeared to be opening up.

Sadly for England and Southgate, they were unable to take the chances that came their way, and they ran into France keeper Lloris at his best.

And it will be captain Kane who feels the disappointment most acutely after missing that second England penalty six minutes from time with the all-time England goalscoring record at his feet.

There was a palpable sense of disbelief around the stadium as this most reliable of penalty takers fired his spot-kick horribly high into England’s fans behind the goal.

It was a rare lapse and manager Southgate was swift to come on to the pitch at the final whistle to console a player who has been one of his outstanding contributors.

England’s players looked devastated at the end – understandably, after performing so well.

The irony as they make their departure from Qatar is that while they have exited this World Cup one round earlier than they did four years ago, this England team is much richer in promise. This will, of course, be no consolation to Southgate and his squad.

The pre-match talk centred on how England could stop France’s superstar Kylian Mbappe – but in the end, their inspiration came from elsewhere to set up that semi-final against Morocco.

And the primary source was the superb Griezmann, who pulled the strings throughout, providing the pass for Tchouameni’s strike and later delivering a perfect cross for Giroud to demonstrate his penalty-box expertise by edging in front of Harry Maguire to head powerfully past Pickford.

Mbappe carried real menace throughout but England’s plan to subdue France’s biggest threat worked to a large degree – only for the experienced Giroud, at 36, and 31-year-old Griezmann to combine to put the World Cup holders into the last four again.