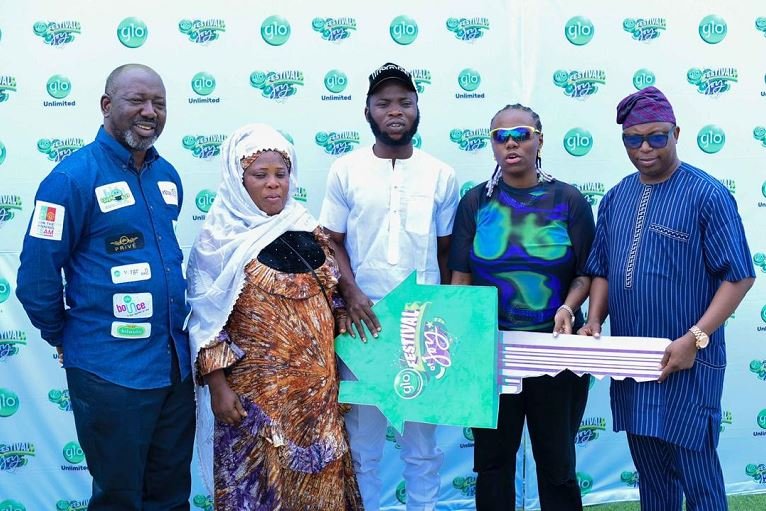 It was a Herculean task convincing 20-year-old Ibrahim Ayanleke Abiodun, a first-year student at the University of Ilorin, that he had won a 3-bedroom apartment in the ongoing Glo Festival of Joy promo.

It took several hours before Glo officials could convince him that he had actually won the house. On Friday, December 16, Abiodun was presented with the keys to the apartment at a colorful ceremony in Lagos. By that time, a different Abiodun received the keys from the Executive Chairman of Ibeju Lekki Local Government, Engineer Abdullahi Olowa, Honourable Noherm Adams, member representing Etiosa Constituency 1 in the Lagos State House of Assembly, and Globacom officials.

He confessed that though he opted into the promo by dialing *611#, he was not prepared for the shock of being called to be told that he had won a house.

Last year, he was scammed of money with which he had hoped to get decent accommodation for his parents. He feared that it was going to be a yearly experience for him. “I was also being careful because all kinds of things are going on in town these days and we need also to know that this is also December when scammers would also try last-minute activities to scam people”, he said.

To escape what he thought was an attempt to scam him when he was called on Thursday, Abiodun told Glo officials that he was going to come with his soldier father’s escorts. But he refused to be moved. It took a video call showing him the premises of Globacom as well as friends and neighbors to convince him that the calls from Glo were actually genuine and that his status had indeed changed to that of a landlord. He later showed up on Friday to claim his prize.

The executive chairman of Ibeju Lekki, Engineer Abdullahi Olowa, appreciated the great strides of Globacom, stating that the company had, since inception, pioneered and sustained the noble tradition of putting subscribers first in its operations.

“It is heartwarming to note that Globacom still keeps faith with the tradition of adding wholesome value to the lives of its subscribers”, he said.

Globacom’s Regional Manager, Lagos 1, Mr. Temitope Ayeni, encouraged subscribers wishing to participate in the promo to “dial the dedicated short code *611# and recharge as appropriate to stand a chance to win any of the prizes on offer. Subscribers who desire to win any of the 3-bedroom houses must make data subscriptions up to at least N20,000 during the promo period. The more they recharge, the higher the chances of winning”, he said.

Bamise, Deborah, Sylvester: Where is the justice? by Bright Okuta