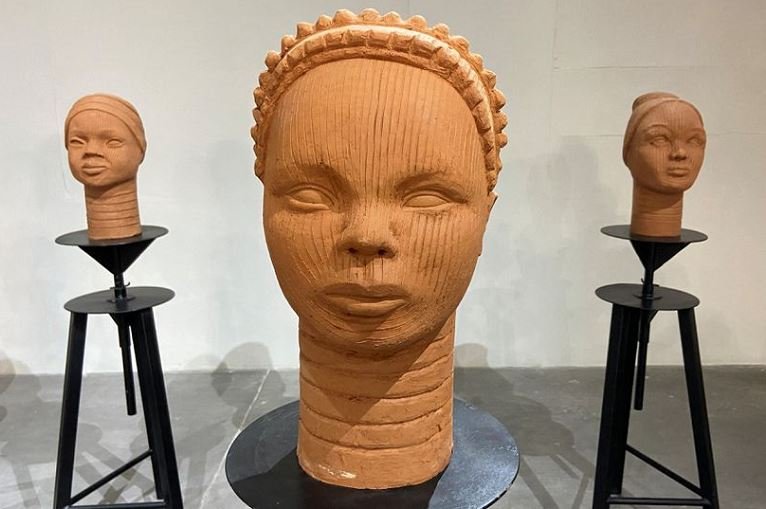 The faces of 108 Nigerian girls who are still missing eight years after they were kidnapped in Chibok, Borno state by Boko Haram insurgents have been sculpted in clay in a collaboration between an artist, a group of potters and university students.

The artwork, titled “Statues Also Breathe” and conceived by French artist Prune Nourry, consists of 108 life-size clay heads, made by 108 students from all over Nigeria, and now on display at an art gallery in Lagos.

Boko Haram militants abducted around 270 teenage girls from a school in the northeastern town of Chibok in 2014.

The mass kidnapping initially prompted worldwide outrage, with the slogan #BringBackOurGirls trending on social media and prominent figures including then U.S. first lady Michelle Obama pressing for their return.

Since then, about 160 of the girls have been released, some after years of captivity, but the story has faded from the headlines.

Nourry collected photos of the missing Chibok girls from their families and passed the images on to the students who created the sculptures at a one-day outdoor workshop on the campus of Obafemi Awolowo University in Ife, southwest Nigeria.

A man walks across a set up of terra cotta heads, a French woman collection representing the remaining Chibok school girls in captivity in Lagos, Nigeria, November 29, 2022 REUTERS/Seun Sanni

A small group of women who were among the abducted girls and were later released took part, as did some parents of the missing women.

Nourry said it was a cathartic experience for all involved.

“For the students, for all of us who felt so useless when something so incredible happened and you cannot do anything about it, the fact of being able to at least give a little thing through sculpture, through what we know how to do, was healing,” she said.

The young artists took inspiration from photos of Ife heads – terracotta sculptures made in the region centuries ago and considered to be among Nigeria’s most significant cultural artefacts.

They used clay from the Ife area – the substance that, according to the Yoruba ethnic group’s creation myth, was used to form humans – sourced by a community of local female potters, who also contributed to the creative process.

“These girls have been in distress for eight years,” said Habiba Balogun, coordinator of the Bring Back Our Girls campaign in Lagos.

“I am really happy that a project like this has come up that is really going to elevate the level of discourse and understanding, and have a permanent record in the history of this our country about something tragic like this.”