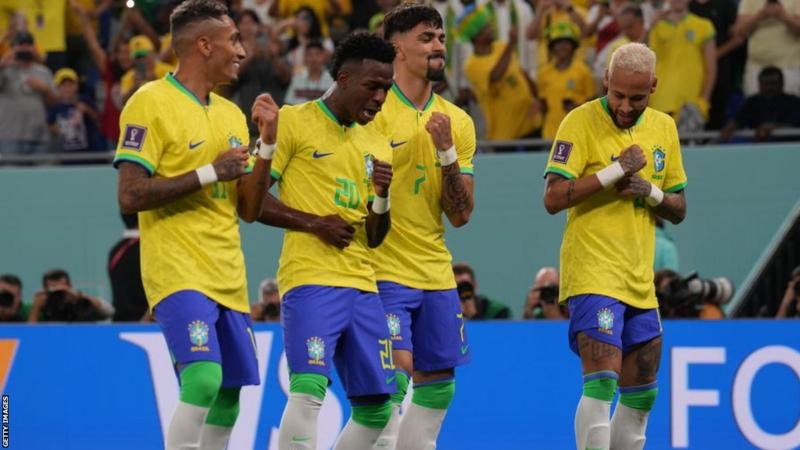 Brazil delivered an ominous message to their World Cup rivals with a dazzling display of attacking brilliance to dismantle South Korea 4-1 and set up a quarter-final against Croatia.

Neymar made a goalscoring return to action after injury at Stadium 974, but Brazil’s superstar was only one element of a devastating performance that ripped South Korea to shreds and settled this last-16 game well before half-time.

Vinicius Junior set the tone with a composed penalty-area finish from Raphinha’s cross after seven minutes, and Neymar doubled Brazil’s advantage from the spot six minutes later fouling a foul on Richarlison.

It was Neymar’s 76th goal for Brazil, leaving him just one behind the legendary Pele’s all-time record.

Richarlison then added to his personal showreel of great goals at this World Cup when he followed his spectacular volley against Serbia with a real work of art, controlling the ball three times with his head and foot before moving into position take Thiago Silva’s pass in his stride and score.

Brazil went four up with another gem after 36 minutes, Vinicius picking out Lucas Paqueta for West Ham’s expensive acquisition to score with a well-placed volley.

South Korea, to their great credit, continued to compete and forced several fine saves from Brazil keeper Alisson, before substitute Paik Seung-ho pulled one back with a glorious 30-yard strike to add to the night’s collection of special goals.

Lucas Paqueta scored his first goal in the 2022 World Cup

For 45 minutes at Stadium 974, Brazil hit heights no other team has reached at this World Cup, demonstrating the level that will be required to overcome Tite’s team, producing a collection of goals constructed in their country’s best traditions.

And it was all achieved with the smooth freedom of expression that is Brazil’s trademark, a four-goal half-time advantage demonstrating their supremacy.

Richarlison’s goal was a golden moment of this World Cup, followed by a team dance that even rather incongruously included coach Tite in the communal celebration.

Neymar eased himself back into action with silky touches and his goal, before being replaced late on after proving his fitness following the ankle injury sustained against Serbia that forced him out of two group games.

He is part of a potent Brazil attacking triumvirate alongside Richarlison and Vinicius, both on the scoresheet and both making a serious mark on this World Cup.

Tite was so comfortable with Brazil’s position that he was even able to give Alisson a rest and send on third-choice keeper Weverton for World Cup action.

Brazil will now be heavy favourites against Croatia after putting down a marker with the best display – or at least 45 minutes before they eased up – by any team in Qatar so far.

Brazil’s three-goal victory margin was convincing and deserved, but there was another aspect to this win that showed just how strong Tite’s squad is.

South Korea may have been outclassed for large parts of the game but they still had plenty of chances, only to run into one of the world’s outstanding goalkeepers in Liverpool’s Alisson.

For all the understandable attention on Neymar and his attacking cohorts, Brazil have a last line of defence that stands comparison with anyone at this tournament, with Manchester City’s Ederson another world-class deputy and Weverton getting action here.

South Korea never gave up trying to create opportunities but Alisson was outstanding, tipping over a long-range effort from Hwang Hee-chan before reacting quickly to block him after the break. He also raced off his line to block Tottenham’s Son Heung-min when he was clean through.

Brazil may be full of attacking options but they also have the protection of Alisson, who has taken his outstanding form at club level this season on to the World Cup stage.

Related Topics:BrazilSouth Korea
Up Next

Madrid to pay £108m for Bellingham, Smalling heads to Inter