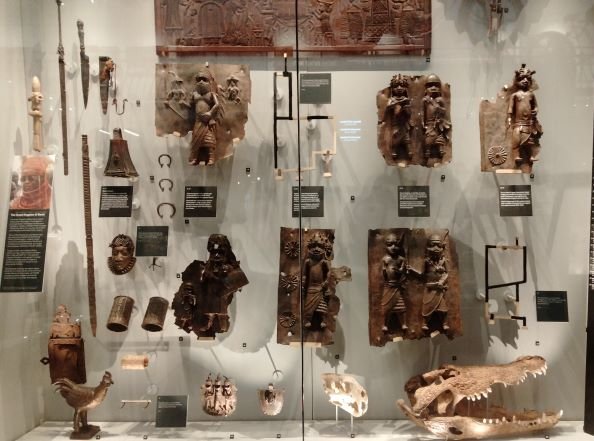 BeninGermany’s Foreign Minister Annalena Baerbock has handed 20 artefacts looted in the 19th Century back to Nigeria at a ceremony in the capital, Abuja.

The return of this set of Benin Bronzes follows a deal made earlier this year to transfer ownership of more than 1,000 of these precious objects.

In July, Nigeria said it was the first time a European country had entered into this kind of agreement.

Ms Baerbock said it was part of efforts to deal with a “dark colonial history”.

Speaking in Abuja on Tuesday, she added that it was an opportunity to right some of the wrongs of the past.

Among the objects returned were some of the famous ceremonial heads, an ivory carving, as well as a decorated plaque.

Moves to return objects stolen in the colonial era have been gathering momentum in recent years as European countries and museums grapple with how artefacts came into their possession.

The term Benin Bronzes refers to thousands of metal sculptures, plaques and carvings made between the 15th and 19th Centuries and looted by British troops in 1897 from the West African kingdom of Benin, in modern-day Nigeria’s Edo state.

The sculptures, prized for their beauty and technical artistry, are of spiritual and historical significance for the people from that part of Nigeria. Their theft still remains a point of pain for the descendants of those from the ancient Benin kingdom.

After being shipped to the UK in the late 19th Century, many were auctioned off in London and some were bought by German collectors, Germany’s foreign ministry has said.

The country has been holding around 1,100 of the estimated 5,000 that were taken, it added in a statement.

Others are in the archives of museums in the UK, including the British Museum, which has the largest single collection of around 900 objects. An act of parliament prevents the British Museum from returning them.

But last month, London’s Horniman Museum, which is a private charity, handed back dozens of items including some Benin Bronzes to Nigerian ownership – making it the first museum in the UK to officially take such action on this scale.

Nigeria’s National Commission for Museums and Monuments has issued formal repatriation requests to museums across the world.

In 2026, the government plans to open the Edo Museum of West African Art in Benin City, which is being designed by British-Ghanaian architect Sir David Adjaye, to house the largest collection of Benin Bronzes ever assembled.

In the colonial era Germany governed parts of West, East and Southern Africa until the end of World War One.

Last year, it officially acknowledged committing genocide during its occupation of Namibia.

German colonisers killed tens of thousands of Ovaherero and Nama people there between 1904 and 1908.

In recent years, Germany has returned human remains to Namibia, some of which were used in now-discredited research into racial classification.