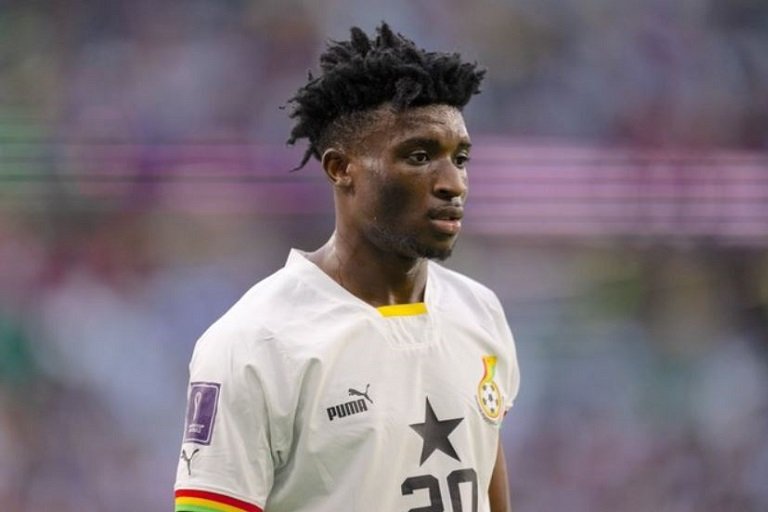 Barcelona are keen on Mohammed Kudus but the Ghana midfielder, 22, is open to a move to the Premier League, with Ajax likely to ask for about £40m. (Sun)

Manchester United are ready to move for Cody Gakpo in January as PSV Eindhoven are willing to sell the Netherlands striker, 23, following his impressive form at the World Cup. (Sun)

However, United would have to pay £50m for Gakpo – double what PSV wanted in the summer – so may switch their attention to AC Milan‘s Portugal forward Rafael Leao, 23. (Mirror)

Leao was expected to join Real Madrid in the summer but he is now being lined up as a target for 2024 by the Spanish giants along with Manchester City‘s Norway striker Erling Haaland, 22, and Palmeiras’ Brazilian forward Endrick, 16. (Sport – in Spanish)

Everton and Leeds have joined Aston Villa and Wolves in the battle to sign Atletico Madrid‘s Brazil striker Matheus Cunha, 23. (Relevo – in Spanish)

Wolves are also in talks with Atletico about signing Brazil centre-back Felipe, 33, in a potential “package” deal with Cunha for January. (Fabrizio Romano)

Manchester United failed to sign Brighton’s Ecuadorian midfielder Moises Caicedo for £3.6m two years ago and will have to pay up to £70m for the 21-year-old this time around. (Sun)

Arsenal manager Mikel Arteta will have £50m to spend in January but is not planning on signing a replacement for Gabriel Jesus after the Brazil striker, 25, was ruled out of the rest of the World Cup with a knee injury. (Football Insider)

Jesus has flown back to London and will find out the extent of his injury following a consultation with Arsenal doctors on Monday, with some reports suggesting he will be out for three months. (Sun)

Atletico Madrid are hoping Joao Felix can increase his value during the World Cup before looking to sell the Portugal forward, 23, in January. (Marca – in Spanish)

Watford are on the verge of completing the signing of Canada midfielder Ismael Kone, 20, from CF Montreal on a four-and-a-half-year deal. (Watford Observer)

Meanwhile, Barcelona want a long-term replacement for Spain midfielder Sergio Busquets, 34, and are interested in Leicester’s Youri Tielemans, who is out of contract at the end of the season, but they suspect the Belgium midfielder, 25, has already said he will join another club. (Marca – in Spanish)

A joint Saudi-Qatari consortium is preparing a £3.2bn bid to take over Liverpool. (Sporting News)