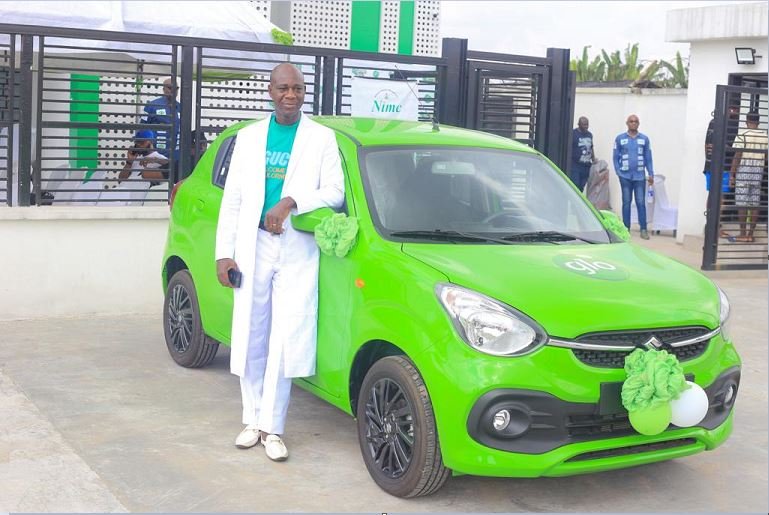 It was a joyous occasion for Glo subscribers in Warri, Delta State, on Tuesday as they went home with various prizes in the company’s Festival of Joy promo.

A 52-year-old Manager with a first generation bank, Anthony Ukpu, won a brand new Suzuki Calerio car which was presented to him by the Chairman, House Committee on Health, Delta State House of Assembly, Hon. Augustine Uroye, and Glo officials. Many other Nigerians also went home with different other prizes including power generating sets, sewing machines and rechargeable fans.

Ukpu, a native of Isoko South Local Government Area in Delta State said, “I joined the promo about three weeks ago after dialing *611#. Since then I have been recharging consistently, with 5,000 being the minimum.

“My target was either the house or the car. Last week, while talking to my wife, I prophesied that I will win either a house or a car in the ongoing Glo promo by December. Today I still recharged with 5,000 in the morning and by noon I got a call from Glo that I won a car”.

The overjoyed banker added, “Tell me which network is better than Glo?, They are really taking care of Nigerians. I don’t regret being on the Glo network since inception and making its SIM my number one contact”.

Some of the winners also spoke at the event. Toyin Aiyenuberu, a Warri-based Technician who won a generator, thanked God and Globacom for the early Christmas gift, while a sewing machine winner, Rachael Pessu, said it is a thing of joy to win a prize out of millions of other
subscribers.

“To God be the glory, I will use it in my fashion business”, she added excitedly. Also Jolomi Ateto, a nurse who won a rechargeable fan said it will be useful in this hot season. She applauded Globacom for always giving Nigerians the opportunity to win prizes every year.

Speaking at the event Hon. Augustine Uroye said Globacom is empowering Nigerians through its promo, adding that “what they promised is being presented to the people across the country, including in Warri here today. They have done well and I encourage Nigerians to keep recharging to be able to win more prizes, especially the houses and cars”.

Globacom’s Regional Manager, Warri, Mr. Julius Arhebun, said the Festival of Joy Promo had produced many lucky winners across the country, urging subscribers to simply dial *611# to join the promo and keep recharging for voice and data (as desirable) during the promo period in order to be eligible to win the prizes on offer.

The event was attended by Nollywood duo of Roseline Meurer and Nosa Rex, Glo dealer and Managing Director of Stanmats Resources Limited, Mr. Omatsayinone Stanley, as well as Nigerians from all walks of life who came to rejoice with the winners.

2023: We won’t allow anyone use money, thugs to intimidate voters – Buhari