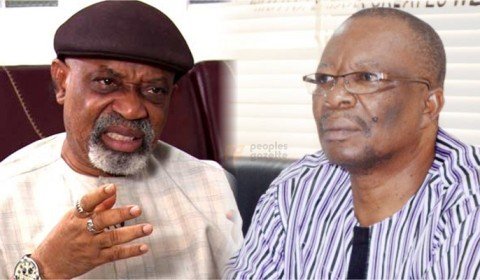 ASUU considers legal action against FG over eight months withheld salariesTHE Academic Staff Union of Universities (ASUU) has vowed to fight on until the withheld eight months salaries of its members during the period of the recently suspended strike are paid to them in full.

To this end, the lecturers might be considering instituting a suit against the Federal Government in a bid to compel it to release the withheld salaries to them. ASUU president, Professor Emmanuel Osodoke, has, however, expressed reservation about approaching a court over what he termed slow dispensation of justice in Nigeria.

Osodoke, in a telephone interview with the Nigerian Tribune, said going to court in Nigeria is time-wasting, as such the union would continue to explore other means of compelling government to pay the outstanding salary arrears due to his members.

However, some members of ASUU who spoke with our correspondent over the withheld salaries as a result of non-work-no-pay policy invoked by the Federal Government, insisted that taking legal action against the Federal Government could not be ruled out if the current option being adopted fails to yield positive fruits.

ASUU had embarked on the protracted strike on February 14, 2022 over failure of the Federal Government to meet the demands of the union.

The strike was eventually suspended on Friday, October 14, 2022 based on the orders of the appeal court which mandated the union to suspend the strike in obedience to earlier ruling of the National Industrial Court of Nigeria.

The Federal Government through the Minister of Labour and Employment, Dr Chris Ngige, had invoked the policy of no-work-no-pay, and as such the lecturers were not paid for the months they spent on strike.

It further became clear to the lecturers that government was not ready to pay them the outstanding salary arrears when the government counted the number of days they worked in October and decided to pay them on “pro-rata basis”.

Speaking with the Nigerian Tribune on Sunday in Abuja, the zonal coordinator of ASUU, Abuja, Dr Salahu Lawal, insisted that the Federal Government must pay the withheld salaries, saying the argument that lecturers would not be paid for work not done did not hold water. He lamented that the withheld salaries had adversely affected ASUU members, lamenting that lecturers could not teach on an empty stomach and give their best.

Lawal said: “For now we are still dialoguing with the Federal Government to let them see the reasons why they must pay that money. They claimed that we cannot be paid for the work not done, but they have forgotten that in academic activities, there is no break.

“Wherever you stopped during the strike when you resume, you take off from that place because you cannot jump to another level. So, the work we left undone has to be done and because of that we deserve to be paid. There’s nothing they can do, government has to pay that money.”

On the possibility of taking legal action, Lawal posited: “For now, ASUU is open to discussion and that is why we want government officials to see reasons as to why they should come back to the roundtable for us to be able to put it forward to them why they must pay that money.

“For now we are watching to see how far the approach we have adopted would take us, how it will yield fruit. Some well-meaning Nigerians have been talking sense into the government. We know that some people in government are not telling the truth to the authorities, maybe because they have one or two things they are hiding. If an individual has a score to settle with people, they should not allow that to affect the running of government.