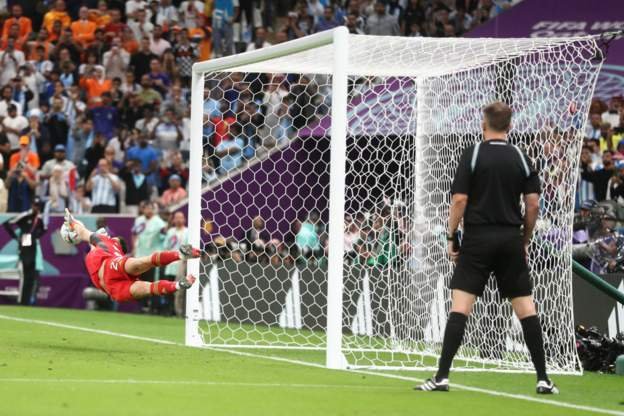 Argentina goalkeeper Emiliano Martinez saved penalties from Virgil van Dijk and Steven Berghuis before Lautaro Martinez scored the winning spot kick to secure them a 4-3 shootout win over the Netherlands on Friday after their World Cup quarter-final finished 2-2 after 120 minutes.

In a scrappy half-hour of extra time with the scores level, Enzo Fernandez rattled the post in the closing seconds while Martinez and German Pezzella also had efforts blocked or parried away as Argentina desperately pushed for a winner.

The Netherlands had rarely troubled Argentina during the match before substitute Wout Weghorst’s header 10 minutes later sparked them into life and he rolled the ball past goalkeeper Emi Martinez deep into stoppage time to send the game into extra time.

Argentina captain Lionel Messi had superbly set up Nahuel Molina for their first-half opener, threading a sublime pass through the Dutch defence, before coolly slotting in a penalty in the 73rd minute after Denzel Dumfries fouled Marcos Acuna.

Argentina will next face Croatia, who beat Brazil on penalties earlier, on Tuesday for a place in the final.