We can do much more together, VP Osinbajo, Deputy PM Freeland say
Advertisement 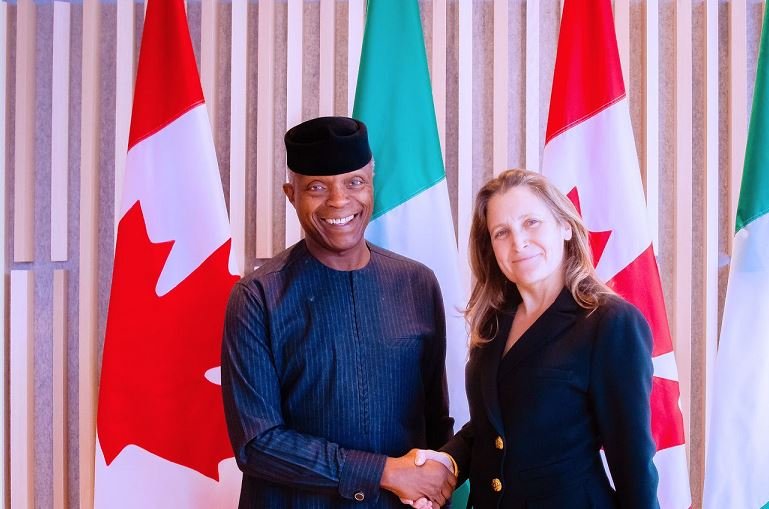 This was the highlight of the meeting between both leaders in Ottawa, the capital of the North American country yesterday.

During his interaction with top Canadian parliamentarians, including senators and cabinet members led by Freeland, Prof. Osinbajo noted that, “we are hoping for much more that we can do together.”

The Canadian Deputy Prime Minister, who is also the nation’s Finance Minister, had earlier expressed similar sentiments while welcoming the Vice President.

She observed that the Canadian government values its relationship with Africa, especially Nigeria, and has been “looking forward to this visit for a long time,” adding that the relationship with Nigeria is “very important to us.”

On the global net zero emissions targets, and energy transition, Vice President Osinbajo reaffirmed the view that gas ought to be adopted as a transition fuel, a notion he said garnered traction at the recent COP27 conference in Egypt, even though still widely unacknowledged in the West.

“We believe we must use our gas as transition fuel; we have huge gas reserves. We would like to continue to use our gas during the transition,” the Vice President said while explaining that the Federal Government’s Energy Transition Plan is focused on renewable energy, including the ongoing Solar Power Naija Programme, which was launched under the Economic Sustainability Plan.

Responding, the Canadian Deputy Prime Minister, who wondered whether countries such as Nigeria are already struggling to get financing for gas projects said, “we will be happy to keep talking with you on that, ” adding that the use of Natural Gas makes sense, and noting that the dialogue should continue.

Osinbajo and Freeland both exchanged notes on some of the common and peculiar economic challenges in their respective countries, including fiscal and monetary challenges, subsidies, financial inclusion, social investments programmes and strategies to support the vulnerable, among others.

They also discussed the African Continental Free Trade Area (AfCFTA), observing that the market provided opportunities for mutual benefits, not only for African countries, but also Canada which is desirous of contributing to its development and also tapping into the continental market.