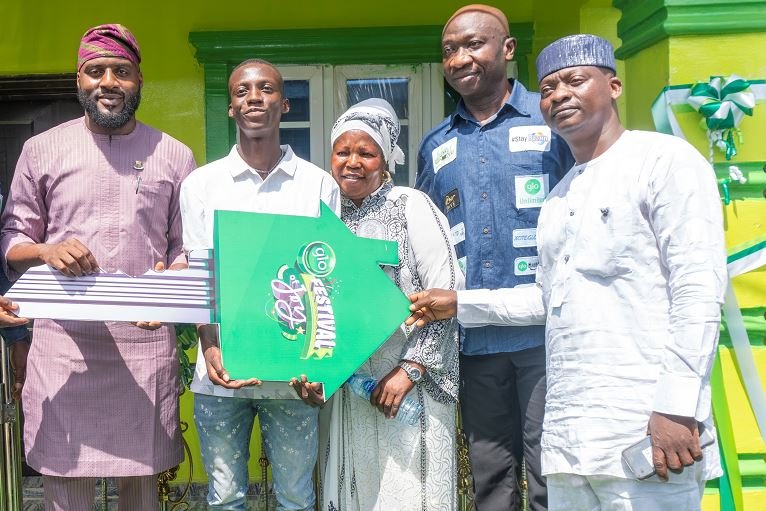 The event which was held in Ibadan on Wednesday was the first prize-presentation exercise in the ongoing promo and saw an excited 19-year-old, Ibrahim Akindele, receive the keys to a three-bedroom house.

Speaking at the event, Akindele who explained that the decision on how to use the apartment would be left for his parents to make, said, “I was in disbelief, I thought it was just someone playing pranks”. He however added that he knew from past events that Globacom gives huge prizes to its subscribers.

Also at the event was 54-year-old mother of the winner, Mrs. Funmilayo Akindele. The visibly elated woman said, “The house will be a place of refuge for Ibrahim and his older brother while we will be coming to spend weekends with them”.

Speaking at the event, Mr. Akeem Yusuf, Globacom’s Head of Operations, West Territory, saidthat the promo was conceived in line with the commitment of Globacom towards empowerment of its customers, adding that Festival of joy will reward Glo subscribers with amazing prizes.

Ibrahim Akindele poses with a Glo Festival of Joy banner

He stated that, “Our commitment to the total well-being of our subscribers and the realization that shelter is one of the key needs of man have fuelled our desire to help some of them have houses of their own through this promo. This kind of prize is unprecedented as no brand has ever offered or presented such to their customers before”.

The second prize presentation event also comes up in Ibadan where a lucky winner will drive away a brand new Kia car, while other winners will go home with power generators, sewing machines and rechargeable fans on Thursday, November 17.

The event was attended by important dignitaries including the Speaker of the Oyo State House of Assembly, Mr. Debo Ogundoyin, and other key members of the state legislature.

Troops eliminate over 50 terrorists in Nigeria