Tottenham knocked out of Carabao Cup by Forest
Advertisement 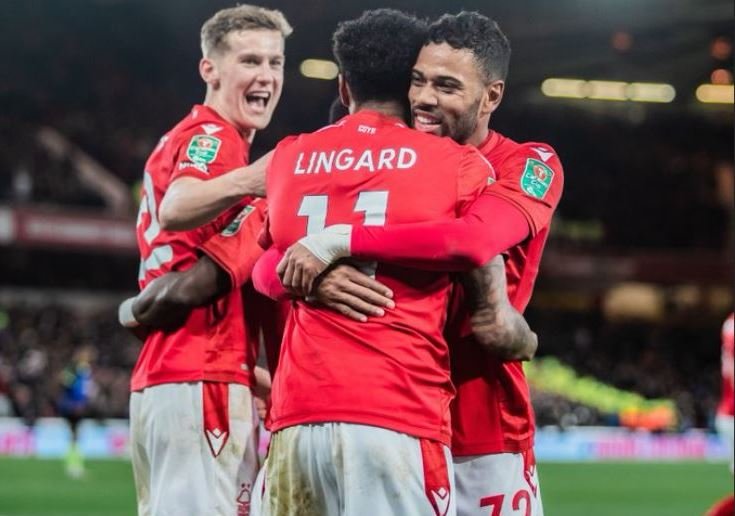 Tottenham Hotspur were knocked out of the Carabao Cup by the Premier League’s bottom-placed side Nottingham Forest.

Forest were the better team and took the lead on 50 minutes through a fine curled effort from Renan Lodi.

Spurs manager Antonio Conte named a strong XI, including Harry Kane, but his side were outplayed at the City Ground.

Steve Cooper in contrast made nine changes from the side which drew with Brentford in the league on Saturday, but his team played much more flowing football before finding the breakthrough early in the second half.

Lingard won the ball in midfield, on-loan Atletico Madrid left-back Lodi charged forward onto it, cut in on his right foot and curled a shot past debutant goalkeeper Fraser Forster.

Forest doubled their lead seven minutes later when former Spurs defender Serge Aurier lead a counter-attack down the right wing, with his deep cross headed back across goal by Sam Surridge for Lingard to nod in.

The home side were made to hang on as Orel Mangala was sent off with 15 minutes remaining after getting a second booking for a clumsy challenge, but they did so to leave Spurs disappointed.

Kane unable to save poor Spurs

Tottenham have not won a major trophy since 2008 and this, along with questions about Spurs’ form despite reaching the Champions League knockout stage, may have played a role in Conte’s selection.

It was a remarkably strong side with only three changes from Sunday’s loss to Liverpool, including Kane leading the line the evening before the England squad is named for the 2022 World Cup.

Eric Dier, likely too to feature in Gareth Southgate’s selection for Qatar, was also selected – but neither could lift Spurs on an evening where they were roundly outplayed.

They nearly trailed after 10 minutes in bizarre circumstances, a clearance coming off Forest striker Taiwo Awoniyi and hitting the post with Forster flat footed. The ball rebounded to Lingard but Forster was able to save the midfielder’s header.

Spurs were also fortunate not to concede a penalty when a Lodi cross struck Ryan Sessegnon’s arm, with the lack of VAR in the EFL Cup before the semi-finals saving the left wing-back.

Forest eventually found the goals they deserved in the second half, and while Spurs improved after Mangala was dismissed they could not find a breakthrough, Richarlison’s late header past Wayne Hennessey was ruled out for offside.

Kane’s 21st consecutive start for Spurs came to an end on the hour mark when Conte substituted his captain. Fortunately for Southgate and England’s fans, it looked like a tactical change rather than because of any injury.

There will be worries for Denmark however, as Pierre-Emile Hojbjerg was taken off at half-time with a knock.

Forest aiming for another cup boost

Cooper spoke before the match of wanting Forest to use the EFL Cup as a platform for Premier League survival.

Forest are bottom of the table, three points from safety, and host Crystal Palace on Saturday before the break for the World Cup.

Last season’s run to the FA Cup quarter-final – where they were eventually knocked out by Liverpool – aided their promotion bid, and beating a Champions League hopeful here will give renewed hope they can fight their way out of the bottom three.

Especially impressive was Lingard, who is unlikely to be named in the England squad on Thursday but showed with his energy and creativity here how important he could be to Forest’s survival bid.

The 32-cap England international claimed a goal and assist and could have created more goals, setting up Surridge with a defence-splitting pass on 54 minutes only for Forster to save with his legs.

Forest’s win was only their second since beating Grimsby in round two – they overcame Liverpool in the league at the end of October, before seeing off another top-four contender in the cup.