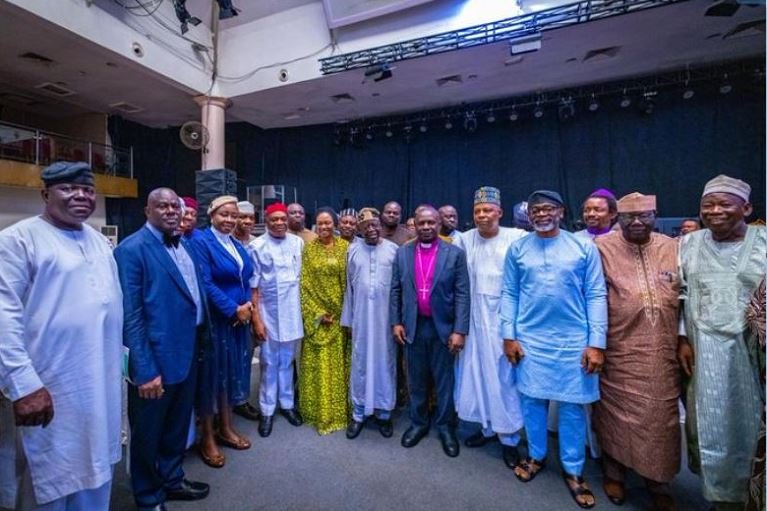 Bola Tinubu, the presidential candidate of All Progressives Congress (APC) has met with an unnamed leadership of the Christian Association of Nigeria (CAN) assuring them that he will not run his administration on the basis of religion if elected.

Tinubu who met with the CAN leadership in Abuja on Wednesday said he did not consider religion when he was picking a running mate, instead he went for the best choice available.

At the meeting, Tinubu assured CAN that the same way his administration did not discriminate against anyone either based on tribe, religion or gender when he was Lagos governor, he would not do such as president.

The leadership of CAN under new president Daniel Ukoh presented a charter of demands and issues to the APC presidential candidate,” a statement by Tinubu’s media team said.

They demanded among others state police or a decentralized policing system, devolution of power to states, equal rights for all religions and their adherents, right to self-determination by all ethnic groups, right to control natural resources by communities that bear them, no to open grazing, and equitable electoral system that guarantees the right to vote and be voted for by all.

Tinubu said, “My belief in the need for secular government and faith-based organizations to work in unison is not something adopted recently to benefit my campaign.

“As governor of Lagos, I partnered with the Christian to improve lives and foster education. For instance, I returned mission schools to their owners, most of who are Christians.

“I instituted yearly Christian denomination service at the governor’s residence as we approached the new year. This tradition continues in Lagos,” Tinubu said.

“More importantly, we fostered an atmosphere of religious tolerance and inter-faith collaboration. My cabinet was diverse and talented.

“In the exercise of government, I did not give a  thought to whether a team member was Christian or Muslim, Yoruba, Igbo or Arewa.

Tinubu added that, “I have never lent myself to baseless prejudice and discrimination. To do so would be a recipe for failure in the governance of a diverse society and I am not a man that is familiar with failing.

“I never chased people out of Lagos nor made them feel unwanted. Under my administration Lagos welcomed all comers and continues to do so today.

“After me, Lagos has had one Muslim and two Christian governors. I may not be perfect. What human being is? But I am not a petty man secretly wedded to secret biases and prejudices.

Tinubu noted that, “As such, I  see all Nigerians as equals and as brothers and sisters in our national family. This means no one is inherently inferior or superior to anyone else, regardless of faith, place of origin, social status and gender.  Anyone who does not hold this fair and equitable view, should not run for president in a country such as ours.”

Tinubu said the Christian body has a great role as the moral compass of the society which he cherishes and will always support.

“You, as an organization and as individual leaders of CAN, are entrusted as the watch person of the welfare of this society from a Christian perspective. Which means functioning in an atmosphere of charity, understanding, patience and wisdom,” Tinubu said.

“I understand the tremendous importance of your work and have nothing but the deepest respect for your selfless contributions to our national cause,” he added.

On his choice of Senator Kashim Shettima as his running mate, which has generated a lot of controversies, Tinubu assured the Christian body that he made the best available choice at his disposal without recourse to religious sentiments.

“I did not choose Senator Shettima so that we could form a same faith ticket. The ticket was constructed as a same progressive and people- based ideology ticket.

“I offer a confession. I selected Senator Shettima thinking more about who would best help me govern. Picking a Christian running mate would have been politically easier. But the easy way is rarely the right one. The selection of a running mate is at once a very momentous yet very intimate decision.

“Resting such a key decision on religious affiliation as the primary weight did not sit well with me. I am not saying there were not good and adequate potential running mates of the Christian faith.

“Every time I thought about it, and I did think a lot; I came to the same conclusion that  Kashim Shettima’s faith was immaterial.

“He is a brilliant man with superior intellectual capacity. He is studious and detailed oriented. Enjoying excellent organization skills, Shettima fully understands the vital difference between governance and  politics.

“This exceptionally gifted human being has humility of spirit, courage of his convictions and a strongly progressive world view in harmony with my own perspectives on government and its relationship to the governed.

“I trust the calibre of the man. I know the great lengths he went in fighting Boko Haram in his state. He did his best to protect the Christian community and rebuilt damaged churches.

“This man understands the value of our national diversity in all of its ramifications, including religious. He possesses the courage to stand up to those who would wreck that diversity and freedom.”

Tinubu continued that, “I know people have reacted harshly to my selection. They have done so without knowing the man or giving him or me a fair chance.

“The rumour that this is some plot to suppress the Christian community is untrue and unfortunate.

He thereafter shared his campaign policies with the Christian leaders, asking for their support.

Tinubu explained that, “We must move the nation forward more quickly so that hatred and pettiness haven’t a chance to imbed themselves and become the main colours of the fabric of our society.

“My team, Senator Shettima and I have crafted our Action Plan for Nigeria titled Renewed Hope. This agenda is based on the progressive notion that our economy must be recalibrated to ensure better jobs and wages for people. That all are entitled to basic health care and education.

“We will combat hunger and poverty by growing more food and better rewarding farmers for their toil.

“We shall revive our industrial capacity to provide work for our growing urban population and to produce more of the things that we need.

“Where the private sector thrives, we will not attempt to fix what is not broken. Where it falters, government shall lend a hand to keep people employed and the economy vibrant. Where there is a gap, we must fill it so that we more fully employ our idle workforce and productive capacity.

“We must better tend to the poor, vulnerable and elderly by strengthening the social safety net.

“We shall end the fuel subsidy because it has become an unproductive policy favouring an elite that needs no favours while giving the people precious little. Funds that were previously used for the subsidy will be invested in public transportation and other infrastructure, education, and health.

“Let us advance to the economy point where no parent is forced to send their children to bed hungry and no one is fearful that tomorrow will bring more lack and poverty.

“Fiscal power and authority shall be recalibrated to give the states more latitude to better fulfil their mandate of grassroots development and empowerment of people and local communities, This includes assessing  each state’s best option regarding a more active role in crime prevention and law enforcement.

“On security, we will not relent until terrorists, kidnappers  and criminals quit their malign ways or are completely defeated. We shall augment our security forces and use advanced technology to track and defeat these evil groups,” he added.

They said he usually places merit and competence above any other factor in choosing who to work with and he is always moved to act in the best interest of the country.