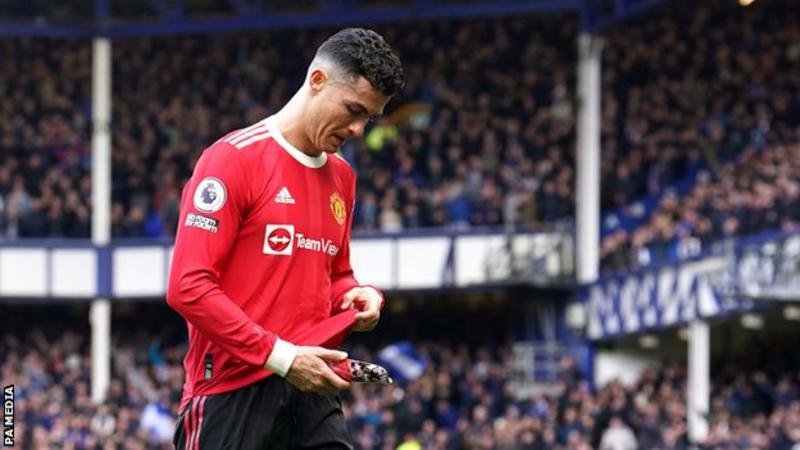 Manchester United may consider tearing up Portugal forward Cristiano Ronaldo’s contract following his tell-all interview with Piers Morgan but will wait until they have heard the full interview before making a decision on the 37-year-old’s future. (Telegraph – subscription required)

Ronaldo could go to Chelsea after the forward was linked with a move to Stamford Bridge in the summer but it was reportedly blocked by then-manager Thomas Tuchel. (CBS via Express)

Manchester United have joined Arsenal in pursuit of Shakhtar Donetsk and Ukraine winger Mykhaylo Mudryk, with United boss Erik ten Hag said to have been interested in the 21-year-old since he was Ajax manager. (Sun)

Mudryk said in an interview with Vlada Sedan, Arsenal defender Oleksandr Zinchenko’s wife, on her YouTube channel that he would “rather be a starter at Arsenal than sit on Real Madrid’s bench”. But the Ukraine winger, 21, wants to speak with Gunners manager Mikel Arteta before deciding on his future. (Vlada Sedan via Metro)

Liverpool are interested in Las Palmas midfielder Alberto Moleiro, with the Spanish 19-year-old also said to be a target for Barcelona and Manchester City. (Express)

Mykhaylo Mudryk has been linked with Arsenal since last summer

Liverpool and Arsenal are also interested in Borussia Monchengladbach’s Thuram – the Frenchman is out of contract at the end of the season and has been heavily linked with Bayern Munich. (90min)

Chelsea are confident they have managed to come to a deal with RB Leipzig forward Christopher Nkunku and that the 25-year-old Frenchman will join in January or the summer. (90min)

Manchester City are planning talks with Portugal midfielder Bernardo Silva’s agent during the World Cup to determine a plan for his future. The Premier League champions are aware the 28-year-old wants to join Barcelona and will not stand in his way if the right offer arrives. (Mundo Deportivo – in Spanish)

Thomas Tuchel must leave the UK in December, due to post-Brexit laws, following his sacking from Chelsea, but two of his coaches, Zsolt Low and Benjamin Webber, who have been placed on gardening leave, can remain because they are still technically under contract. (Telegraph – subscription required)

World Cup 2022 betting odds: Which team are favourites to win?