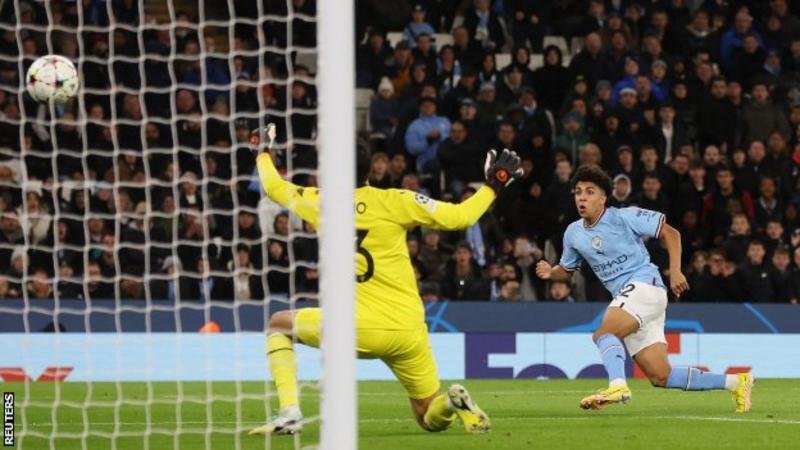 Seventeen-year-old Rico Lewis scored on his full Manchester City debut as the Blues came from behind to beat Sevilla in their final Champions League group game.

City were trailing to a first-half header from former Wolves and Nottingham Forest striker Rafa Mir when Rico Lewis strode on to Julian Alvarez’s pass seven minutes after the break and drove a powerful shot past Yassine Bounou.

It was a moment Lewis will remember for the rest of his life and the joy on his face as he celebrated was something to behold.

But if the young full-back needed a reminder of the sustained quality required to make it at City, he got it through a superb curling pass from substitute Kevin de Bruyne for the Blues’ second, which went around the back of the Sevilla defence and sent Alvarez running clear.

Riyad Mahrez wrapped up the scoring seven minutes from time.

City are now unbeaten in 23 Champions League games at the Etihad Stadium and, with prolific front-man Erling Haaland watching from the stands and Kyle Walker and Kalvin Phillips to return from injury, no-one will relish facing them when the competition resumes in February.

Pep Guardiola has been rotating the same group of experienced players plus a handful of youngsters all season and, despite the packed schedule and his side’s status as group winners already assured, the City boss did not change that philosophy.

There was the first start for Rico Lewis though.

Born in nearby Bury, Rico Lewis has been with City since he was eight, so this would have been a proud night for his family even without the added ingredient of a goal.

Guardiola simply doesn’t just hand first-team spots away, so Lewis would have known he’d earned it. And when his manager was yelling at him early in the game to get wider and make himself available for a pass, it was clear Guardiola would not be going easy on him either.

But Lewis was happy to adopt the Joao Cancelo tactic of moving into midfield from his full-back berth when City pushed forward – and the long-range shot he screwed wide before the opening period drew to a close suggested no lack of confidence.

His exchange of expressions when Phil Foden caught up with him after his goal was wonderful. Rico Lewis’ first City goal had come at a younger age than Foden’s – he had to wait until he was 18.

Rico Lewis was only 13 when City last lost a European home game which is a startling statistic. The sustained ovation he received as he walked around the pitch to the bench after being told to leave it near the halfway line on the far side when he was replaced by Cancelo five minutes from time was the stuff dreams are made of.

Sevilla have been a shadow of their former selves this season.

Julen Lopetegui has already been sacked, thus allowing Wolves to make their move for him and his replacement Jorge Sampaoli has only managed two wins in seven games as his side dropped into the La Liga relegation zone. Yet, both in their starting line-up and on the bench, they have players of quality.

At 34, Ivan Rakitic retains the smoothness on the ball that helped Croatia reach the World Cup final four years ago and Thomas Delaney was excellent in his Borussia Dortmund days.

Mir failed to score in 17 combined appearances for Wolves and Nottingham Forest and has not found the net for Sevilla since August. Given the manner in which he guided his far-post header across goal and sent it curling into the far corner for his first-half opener, he should have done.

It proved to be another false dawn for the Spanish side, who drop into the Europa League, a competition they have won a record six times, most recently in 2020, when they accounted for Wolves and Manchester United in the knockout phase.