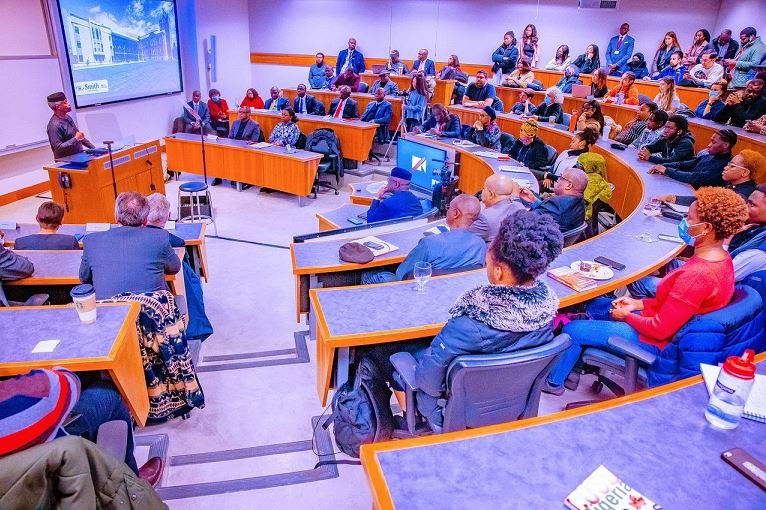 Vice President Yemi Osinbajo says beyond the reduction of greenhouse gas emissions globally, efforts being undertaken to address climate change must also take into consideration its implications on social justice and inequalities, especially for the poor and vulnerable in developing economies.

This was the submission by Vice President Yemi Osinbajo, SAN, yesterday at a Public Lecture he delivered on “Africa and Climate Justice” at Queen’s University, Kingston, Canada on the last leg of his 3-day official working visit to the North American country.

Buttressing his point on the concept of Climate Justice as a just and equitable transition to clean energy, Prof Osinbajo stated that “the notion of climate justice insists that in addition to discussions on greenhouse gas emissions and the need to reduce them, we also recognize that climate change is an inherently social issue with important social justice implications.”

Continuing, he argued that, “we need to reframe our climate action paradigm from merely a technical effort to cut emissions, to an approach that places people and addressing social inequality at the centre of our efforts.

“This is based on the reality that while climate change is already affecting every inhabited region across the globe and no place on earth will be immune to its effects, the impact will be different across key regions and groups.”

The VP pointed out that it is the “poor and vulnerable, largely in developing economies,” who “will be first to suffer and worst hit by the effects of climate change even though they are the least culpable for the climate crisis.”

According to him, “the point that must be made is that it is unfair that while many global north countries recognize the need for a wide range of options and different paths to net-zero for themselves, the same courtesy is not necessarily extended to Africa.”

The Vice President added that “clearly, limiting the development of domestic gas projects, which is a critical energy transition pathway for Africa, violates enshrined principles of equity and justice, and poses dire challenges for African nations, while making an insignificant dent in global emissions.”

Osinbajo observed that despite contributing to barely 3% – 4% of global emissions, which is the least of any global region to emissions, “climate change as a threat multiplier is more evident in Africa than in any other region.”

Prof. Osinbajo then referenced current estimates which posited that Africa was warming faster than the global average and experiencing greater increases in the rise of sea-level.

“The Sahel region has recorded vegetation loss leading to a sharp rise in conflicts between farmers and herders. Southern Madagascar is experiencing what the United Nations is calling the world’s first climate change-induced famine.

“In Nigeria, we are currently grappling with the catastrophic effects of floods that have affected about 34 States of our 36 States, displacing over 1.4 million people, destroying over 100,000 hectares of farmland and causing about 600 deaths. The African Development Bank estimates that African economies are already between 5 – 15% smaller because of climate change,” he observed.

With agriculture providing the largest number of jobs for many developing countries, “reduced crop productivity will worsen unemployment gaps on the continent and result in grave socio-economic consequences,” Prof. Osinbajo submitted, adding that “parallels of these multiplier effects can be drawn in other sectors from health to shelter and security.”

He, therefore, emphasized in the lecture that the energy needs of developing countries, especially in sub-Saharan Africa, have to be taken into consideration, especially by most developed countries in their discussion around climate change and a just transition.

For instance, he stated that while “Sub-Saharan Africa had about 52% of its population or about 568 million people without access to electricity in 2020, most developed countries have 100% energy access.”

Osinbajo went on to point out that “Sub-Saharan Africa remains the only region with a rising number of people without access to clean cooking fuels and technologies, with 19 of the 20 countries with lowest clean cooking access rates in Africa.”

The VP observed that, in practical terms, these energy deficits produce staggering effects. For instance, according to the International Energy Agency, the clean cooking deficits lead to 500,000 premature deaths from household air pollution in Africa annually.

Prof. Osinbajo also noted that this electricity deficit has also worsened gender inequities as “millions of women and children suffer from critical health conditions, and half of secondary schools and a quarter of health facilities in Sub-Saharan Africa have no power.”

He then predicted that because Africa’s current unmet energy needs are huge, future demand will be even greater as populations expand.

“For many gas-rich but energy-poor countries in Africa such as Nigeria, we recognize the role that natural gas, being a much cleaner fossil fuel, must play as a transition fuel in the short term to facilitate the establishment of base-load energy capacity and address clean cooking deficits in the form of LPG. But there has been strong resistance to this,” Osinbajo said.

“Several global North nations have placed restrictions on the use of development funds for natural gas infrastructure in Africa with ripple effects in the private financial sector.”

However, in calling for climate justice for developing countries, the Vice President noted that “one should emphasize that developing economies do not seek a free pass when it comes to climate action.

“There is more than sufficient evidence of commitment to developing climate-sensitive, locally grounded transition pathways as many of us have done with our Nationally Determined Contributions.

“There are also regional initiatives like the Great Green Wall initiative and the original vision was to create a wall of trees against desertification in the Sahel, the horn and across North Africa, but it has grown into a variety of sustainable land use practices designed to combat climate change and desertification and to address food insecurity and poverty.”

The VP added that regarding Nigeria’s efforts towards combating climate change, “we have recently launched a detailed Energy Transition Plan which outlines pathways to universal energy access by 2030 and net-zero by 2060.

“As a global community, we have to acknowledge the differences between groups in how they experience climate change; ensure that processes for making decisions about the impacts of, and responses to climate change are fair and transparent, and determine how the costs and benefits of climate action will be equitably shared.”

Also, speaking on the outcomes from COP-27 in Egypt, Prof Osinbajo mentioned that “a big win at COP-27 was the loss and damage fund which is to compensate poor countries for climate change-related loss and damage.”

Prof. Osinbajo then listed what a just approach to global energy transition should recognize:

– That developing economies must have universal energy access at levels sufficient for dignified livelihoods and economic growth;
– That energy transition must place energy access for both consumptive and productive uses, as well as the required policy flexibility, financial and technical support at the heart of climate action;
– That making capital available for the buildout of energy systems is central to reaching the goals of the Paris Agreement;
– That to meet its decarbonisation obligations, Africa needs both conventional capital flows and the development of innovative mechanisms like debt-for-climate investments and carbon trading;
– That we must lift inhibitive development finance restrictions and upscale technology transfers to ensure developing regions have access to the latest energy innovations and can build local industries on fair terms.

Earlier in the day, the Vice President had met with principal officers of Queen’s University led by the Interim Provost and Vice-President (Academics), Dr. Teri Shearer, where he was briefed on some of the initiatives of the University, including the One Million Teachers programme, developed by the institution’s former graduate student, Hakeem Subair, who also spoke at the event.

The One Million Teachers initiative is an education technology social enterprise startup which aims to attract and retain 1 million teachers (including in, but not limited to, Nigeria), and develop the capacity to train more in areas where classrooms are not available through its online platforms.

Established in 1841, Queen’s University is one of Canada’s leading research-intensive academic institutions and is famous for its role in advancing the goals of the United Nations’ Sustainable Development Goals (UN SDGs).