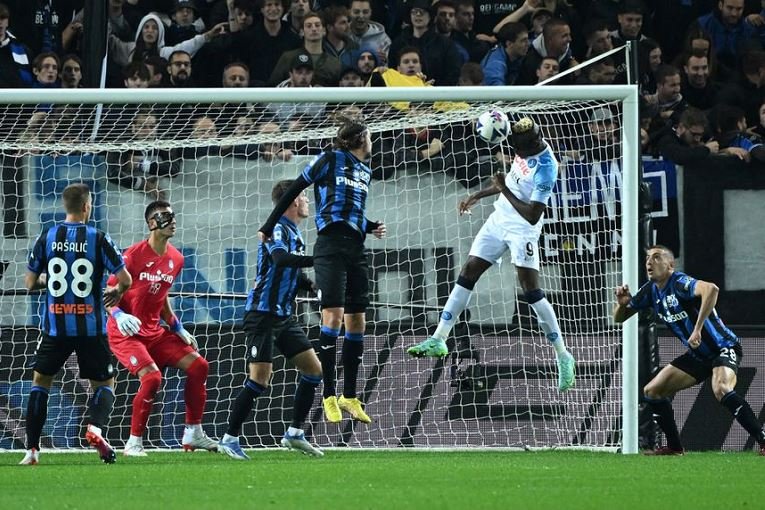 Napoli extended their Serie A winning streak to nine games when first-half goals from Victor Osimhen and Eljif Elmas secured a 2-1 comeback victory at second-placed Atalanta on Saturday that saw them stretch their lead at the top to eight points.

Luciano Spalletti’s men played without their exciting young winger Khvicha Kvaratskhelia, who was out due to acute lower back pain that he felt in training on Friday.

“It was a difficult match, everyone said they were three huge points if we managed to win, but what we want to achieve means every three points are important,” Napoli coach Luciano Spalletti told DAZN.

Atalanta had the first chance after three minutes when striker Rasmus Hojlund went through one-on-one with Napoli goalkeeper Alex Meret, who saved his attempt.

The home side’s Ademola Lookman then opened the scoring after 19 minutes with a penalty after a handball by Osimhen.

In the 35th, Elmas put the visitors in front after taking a pass from Osimhen inside the box, with his effort flying into the net via a slight deflection off Atalanta’s Hans Hateboers.

The hosts started the second half aggressively, chasing an equaliser. Joakim Maehle’s shot after 55 minutes was saved superbly by Meret and Lookman hit the rebound against the bar.

Gian Piero Gasperini’s side failed to score again despite intense pressure and around the hour mark Napoli came more into the game as fatigue started to affect the home side.

Ruslan Malinovskyi tried a last-ditch attempt for the hosts in the 83rd minute but his shot was comfortably saved by Meret.

“I think Atalanta played a fantastic match, they are like Liverpool and Manchester City in standing out in the football world, because they present very clear ideas and approaches, so we all watch them,” Spalletti said.

Napoli have 35 points after 13 games ahead of Atalanta on 27 and AC Milan with 26 before their game against Spezia later on Saturday.