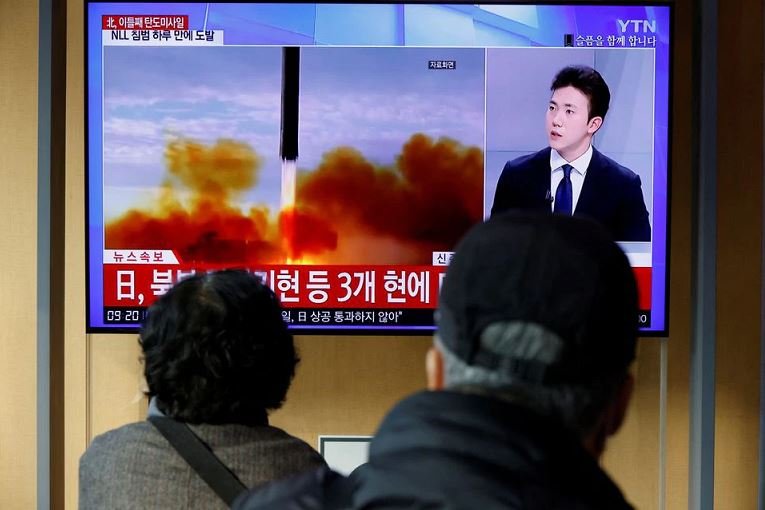 North Korea fired multiple ballistic missiles on Thursday, including a possible failed intercontinental ballistic missile (ICBM) that triggered an alert for residents in parts of central and northern Japan to seek shelter.

Despite an initial government warning that a missile had flown over Japan, Tokyo later said that was incorrect.

Officials in South Korea and Japan said the missile may have been an ICBM, which are North Korea’s longest-range weapons, and are designed to carry a nuclear warhead to the other side of the planet.

Japanese Defence Minister Yasukazu Hamada said the government lost track of the missile over the Sea of Japan, prompting it to correct its announcement that it had flown over Japan.

“It means at some point in the flight path there was some problem for the missile and it actually came apart,” he said.

Although the warhead came down in the sea between the Korean peninsula and Japan, debris would have been travelling at high speed and may still have passed over Japan, Koda added.

North Korea has had several failed ICBM tests this year, according to South Korean and US officials.

The launches came after Pyongyang demanded the United States and South Korea stop large-scale military exercises, saying such “military rashness and provocation can be no longer tolerated”.

It has said that a recent flurry of missile launches and other military activities were in protest against such drills.

The allies have been conducting one of the largest air exercises ever, with hundreds of South Korean and US warplanes, including F-35 fighters, staging around-the-clock simulated missions.

After Thursday’s ICBM launch, the allies agreed to extend the drills past Friday, when they were scheduled to end, South Korea’s Air Force said in a statement.

“A strong combined defense posture of the ROK-US alliance is necessary under the current security crisis that is escalating due to North Korean provocations,” the statement said, using the initials of South Korea’s official name.

The launches came after North Korea fired at least 23 missiles on Wednesday, the most in a single day, including one that landed off South Korea’s coast for the first time.

South Korea issued rare air raid warnings and launched its own missiles in response after Wednesday’s barrage. On Thursday, the South’s transportation ministry announced that air routes had reopened in the area where the missile had fallen, having been closed for around 24 hours.

After the first launch on Thursday, residents of Miyagi, Yamagata and Niigata prefectures in Japan were warned to seek shelter indoors, according to the J-Alert Emergency Broadcasting System.

“We detected a launch that showed the potential to fly over Japan and therefore triggered the J Alert, but after checking the flight we confirmed that it had not passed over Japan,” Hamada told reporters.

The first missile flew to an altitude of about 2,000 kilometres (1,242 miles) and a range of 750 km, he said. Such a flight pattern is called a “lofted trajectory”, in which a missile is fired high into space to avoid flying over neighbouring countries.

South Korea’s Joint Chiefs of Staff said the long-range missile was launched from near the North Korean capital, Pyongyang.

About an hour after the first launch, South Korea’s military and the Japanese coast guard reported a second and third launch from North Korea. South Korea said both of those were short-range missiles fired from Kaechon, north of Pyongyang.

US President Joe Biden and his national security team were “assessing the situation,” National Security Council spokesperson Adrienne Watson said in a statement, which added that the United States would take “all necessary measures” to ensure security.

After North Korea’s launches on Wednesday, including one missile that landed less than 60 km (40 miles) off South Korea’s coast, South Korean President Yoon Suk-yeol described the flights as “territorial encroachment” and Washington denounced them as “reckless”.

On Oct. 4, North Korea launched a ballistic missile over Japan for the first time in five years, prompted a warning for residents there to take cover. It was the farthest North Korea had ever fired a missile.